Artículos relacionados a Autonomous Robots: From Biological Inspiration to Implementa... 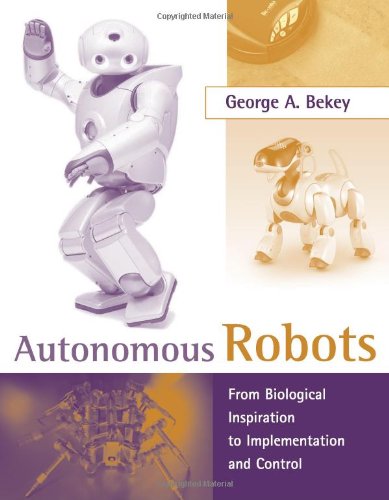 ...an additional milestone in the history of synthetic studies, with a special focus on the recent attempts by robotics scientists...this book should be ideal for the students of robotics research, and the researchers in neighboring disciplines, including computer science, artificial life and intelligence, biology, psychology, and neuroscience. -- Fumiya Iida * Artificial Life *

Autonomous robots are intelligent machines capable of performing tasks in the world by themselves, without explicit human control. Examples range from autonomous helicopters to Roomba, the robot vacuum cleaner. In this book, George Bekey offers an introduction to the science and practice of autonomous robots that can be used both in the classroom and as a reference for industry professionals. He surveys the hardware implementations of more than 300 current systems, reviews some of their application areas, and examines the underlying technology, including control, architectures, learning, manipulation, grasping, navigation, and mapping. Living systems can be considered the prototypes of autonomous systems, and Bekey explores the biological inspiration that forms the basis of many recent developments in robotics. He also discusses robot control issues and the design of control architectures. After an overview of the field that introduces some of its fundamental concepts, the book presents background material on hardware, control (from both biological and engineering perspectives), software architecture, and robot intelligence. It then examines a broad range of implementations and applications, including locomotion (wheeled, legged, flying, swimming, and crawling robots), manipulation (both arms and hands), localization, navigation, and mapping. The many case studies and specific applications include robots built for research, industry, and the military, among them underwater robotic vehicles, walking machines with four, six, and eight legs, and the famous humanoid robots Cog, Kismet, ASIMO, and QRIO. The book concludes with reflections on the future of robotics -- the potential benefits as well as the possible dangers that may arise from large numbers of increasingly intelligent and autonomous robots.

1. Autonomous Robots: From Biological Inspiration to Implementation and Control (Intelligent Robotics a