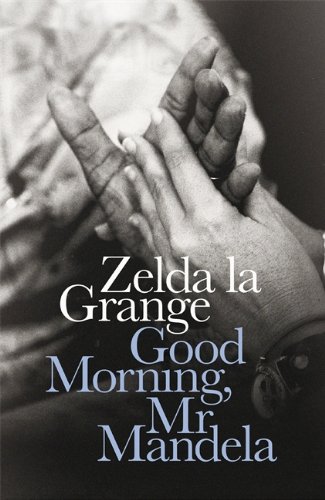 Zelda la Grange has a singular perspective on Nelson Mandela, having served as his long-time personal aide, confidant and close friend. She is a dear friend to both of us and a touchstone to all of us who loved Madiba. Her story of their journey together demonstrates how a man who transformed an entire nation also had the power to transform the life of one extraordinary woman (Morgan Freeman and Lori McCreary, Actor and Producer of "Invictus")

Uplifting. . . generally charming, occasionally faintly indiscreet, but always reverent. Surely no one but Mandela - with the possible exception of the Duke of Edinburgh - could have got away with greeting the Queen with a cheery: "Oh Elizabeth, you've lost weight!" And it is fun to learn that the former leader of the ANC's guerrilla army maintained a rigorous skin-moisturising regime in prison and beyond. When the manufacturers of Mandela's favourite preparation, Palmer's Body Lotion, ceased production in South Africa in the 1990s, elaborate measures had to be taken in the presidential office to procure supplies from America (Sunday Times)

A searingly honest, moving and entertaining account of her years orbiting President Nelson Mandela . . . an excavation of white (particularly Afrikaner) identity and one woman's painful blossoming of a deeper consciousness. . . . Between the rich anecdotes of Madiba's numerous encounters with the world's powerful, wealthy and (in)famous - which she witnessed at close range - as well accounts of his personal quirks, virtues, foibles and torments, La Grange's book sets out her own journey from naïve, completely unaware, conservative white South African to more conscious human being (Daily Maverick)

Compelling and ultimately heartbreaking ... her unguarded honesty allows her to tell a remarkable story (Telegraph)

Zelda la Grange grew up in South Africa as a white Afrikaner who supported the rules of segregation. Yet just a few years after the end of Apartheid she would become a most trusted assistant to Nelson Mandela, growing to respect and cherish the man she had been taught was the enemy. Good Morning, Mr Mandela tells the extraordinary story of how a young woman had her life, beliefs, prejudices and everything she once believed in utterly transformed by the greatest man of her time. It is the incredible journey of an awkward, terrified young typist in her twenties later chosen to become the President's most loyal and devoted servants, spending most of her adult working life travelling with, supporting and caring for the man she would come to call 'Khulu', or 'grandfather'. Here Zelda pays tribute to Nelson Mandela as she knew him - a teacher who gave her the most valuable lessons of her life. A man who refused to be defined by his past, who forgave and respected all, but who was also frank, teasing and direct. As he renewed his country, he also freed Zelda from a closed world of fear and mistrust, giving her life true meaning. Now she shares his lasting and inspiring gifts with the world. This is a book about love and second chances. It will touch your life and make you believe that every one of us, no matter who we are or what we have done, has the power to change.

Comprar usado
Dispatched, from the UK, within... Ver este artĒculo

Descripci¾n Allen Lane, 2014. Hardcover. Condici¾n: Used; Very Good. Dispatched, from the UK, within 48 hours of ordering. Though second-hand, the book is still in very good shape. Minimal signs of usage may include very minor creasing on the cover or on the spine. N║ de ref. del artĒculo: CHL1855950

Descripci¾n Allen Lane, 2014. Hardcover. Condici¾n: Used; Good. Dispatched, from the UK, within 48 hours of ordering. This book is in good condition but will show signs of previous ownership. Please expect some creasing to the spine and/or minor damage to the cover. N║ de ref. del artĒculo: CHL2191733

Descripci¾n Penguin Books, Limited, 2014. Condici¾n: Good. 0th Edition. Ships from the UK. Former Library book. Shows some signs of wear, and may have some markings on the inside. N║ de ref. del artĒculo: 16009652-20

Descripci¾n Allen Lane, 2014. Hardcover. Condici¾n: Very Good. Very Good: a copy that has been read, but is in excellent condition. Pages are intact and not marred by notes or highlighting. The spine remains undamaged. Most items will be dispatched the same or the next working day. N║ de ref. del artĒculo: wbb0016510807

Descripci¾n Allen Lane, 2014. Hardcover. Condici¾n: Good. Ex library copy with usual stamps/stickers Good condition is defined as: a copy that has been read but remains in clean condition. All of the pages are intact and the cover is intact and the spine may show signs of wear. The book may have minor markings which are not specifically mentioned. Most items will be dispatched the same or the next working day. N║ de ref. del artĒculo: wbb0016940181

Descripci¾n Allen Lane, 2014. Hardcover. Condici¾n: Used; Good. **Simply Brit** Shipped with Premium postal service within 24 hours from the UK with impressive delivery time. We have dispatched from our book depository; items of good condition to over ten million satisfied customers worldwide. We are committed to providing you with reliable and efficient service at all times. N║ de ref. del artĒculo: 1577391