The Healthy Edit: Creative Editing Techniques for Perfecting Your Movie 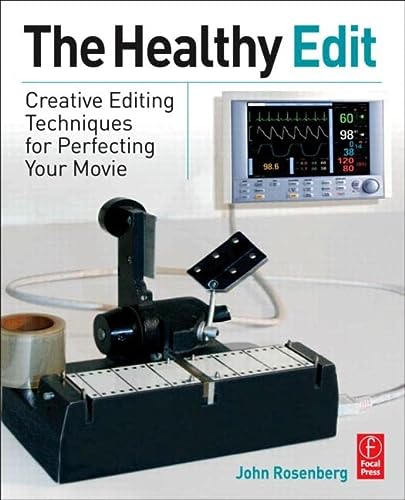 Every film or show that we watch, no matter how great the final cut, has its problems during production. Whether its a bad performance from an actor, a hole in the story or script, continuity or pacing issues, or something being placed in a shot that sho

Every film or show that we watch, no matter how great the final cut, has its problems during production. Whether it's a bad performance from an actor, a hole in the story or script, continuity or pacing issues, or something being placed in a shot that shouldn't be, there's no shortage of problems encountered once postproduction has begun. Fixing these problems then becomes the job of the editor. This book provides those editors with creative editing solutions they can employ to overcome these problems and is the key to nursing a sick project back to health in the editing room.

Though the book takes an application-agnostic approach, specific solutions are presented for today's most commonly used non-linear editing applications. Solutions more relevant to certain genres are discussed in-depth, as are solutions that editors can employ through the use of simple VFX techniques. Case studies and interviews with Hollywood editors provide readers with real-world problems encountered, and solutions used to overcome them. The companion website provides Quicktime videos and Flash animations visually demonstrating problems and how they were dealt with.

Has edited over two dozen feature films for such companies as 20th Century Fox, New Line, Lorimar and LionsGate. He has also edited documentaries and reality-based shows from National Geographic to Playboy. His work has appeared in theaters worldwide as well as on HBO, National Geographic Channel, PBS, Starz and Showtime. Mr. Rosenberg's feature work has spanned most genres, including the Jack Nicholson comedy Man Trouble, Mannequin: On the Move, Moving Violations, Totally Blonde, Mac and Me, The Convent, the cult thrillers Poison Ivy 3 with Jaime Pressly and Body Count with Alyssa Milano, the dramas Horseplayer and Made in Heaven, and the Christmas classic, Prancer. He has also headed post production for Live Entertainment (now Artisan/Lions Gate) and produced the TV pilot The Blue Light with Ernest Borgnine for Keenan Films. Mr. Rosenberg teaches a wide range of editing classes at UCLA Extension, including courses he developed on film doctoring and understanding genre, "Fix It in Post” and "Editing the Genre Film.” His other courses include: "The Art and Craft of Film Editing,” "The Aesthetic Choice: Understanding Motion Picture Editing” (online and classroom), "The Advanced Filmmakers Workshop (post-production),” and several hands-on workshops. His guest speakers, some of whom appear in this book, have included Conrad Buff (Titanic), Richard Chew (Star Wars), Arthur Coburn (Spiderman), William Goldenberg (National Treasure), Bruce Green (Princess Diaries), Richard Pearson (Quantum of Solace), and Jon Poll (Austin Powers trilogy). Mr. Rosenberg also teaches production, post production and an extensive variety of editing workshops at the Art Institute of California, the Independent Filmmakers Bootcamp, and the Learning Annex. He consistently receives top praise from students and department chairs. Mr. Rosenberg has extensive writing experience. He's written for documentaries and reality TV. His short stories appear in numerous literary journals, including The MacGuffin, Foliate Oak and First Class. His screenplays, Stan and Mary Take a Wife and The Blue Light, have been optioned and produced for film and television, respectively. Recently, he won the award for Most Outstanding Fiction at the Southern California Writers Conference.

1. The Healthy Edit: Creative Editing Techniques for Perfecting Your Movie

2. The Healthy Edit: Creative Editing Techniques for Perfecting Your Movie