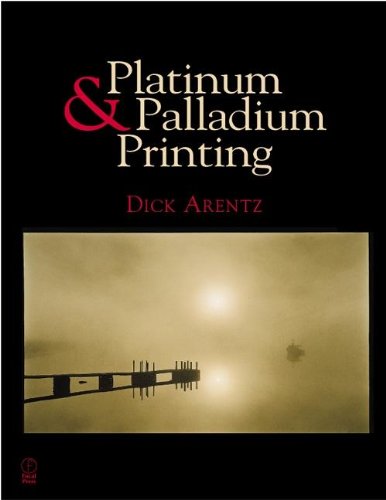 Platinum and palladium printing is one of the easiest of the non-silver processes to learn but it also offers a number of variations, which the photographer can closely control. Platinum printing encompasses three basic phases which are somewhat under the control the photographer: sensitometry, chemistry and mechanics.

This unique book is the only thoroughly comprehensive work on platinum and palladium printing. This exciting method of print-making is explained with an emphasis on technical control not only to manage the cost of materials but also to teach the reader to optimize the variations possible with this process.

Photographers interested in learning or improving upon this process will find this book an indispensable resource and reference guide.

Dick Arentz is a fine-art photographer with more than 75 one-person exhibits of his work. He is well known as the authority on platinum and palladium printing and has given more than 30 workshops and seminars on the subject. His work is included in most major museums and corporate collections. In 1969, after amateur activities, Dick Arentz began three years of study with Phil Davis of the Photography Department at the University of Michigan. His interest at that time was in the large format silver contact print. As an informal "thesis," he produced the Death Valley Portfolio in 1972. That was reproduced in a 1973 issue of Camera Magazine. After a sabbatical in Europe in 1973, Dick Arentz relocated in Flagstaff, Arizona where he taught studio and photographic history at Northern Arizona University. In 1978, He was selected by the Arts and Humanities Commission as one of Twenty Arizona Artists. That year he began a six year project which was to be published as Four Corners Country in 1986, partly subsidized by a Edna Rider Whiteman Foundation Grant. The book was reissued in soft cover in 1994. He returned to Ann Arbor in 1980 to study the platinum process with Phil Davis. Because of the lack of published information and the unpredictability of materials, he began researching and writing about platinum and palladium techniques. In 1983, he began to produce negatives with an antique 12x20 Folmer and Schwing Camera. By 1985, major museums and corporations began to collect his work. In 1987, he produced The American Southwest, a limited edition portfolio of 12x20 platinum prints with an essay by James Enyeart. In 1988, desirous of a change in subject matter, Arentz accepted an Isaac W. Bernheim Fellowship to live and work in Kentucky. He began a two year project photographing the Midsouthern states and Appalachia, concentrating on the human effect of the landscape. In 1990, a traveling exhibition and catalogue of that work, Outside The Mainstream, with an i