Artículos relacionados a Triumph of the City: How Our Greatest Invention Makes...

Glaeser, Edward Triumph of the City: How Our Greatest Invention Makes Us Richer, Smarter, Greener, Healthier and Happier

Triumph of the City: How Our Greatest Invention Makes Us Richer, Smarter, Greener, Healthier and Happier 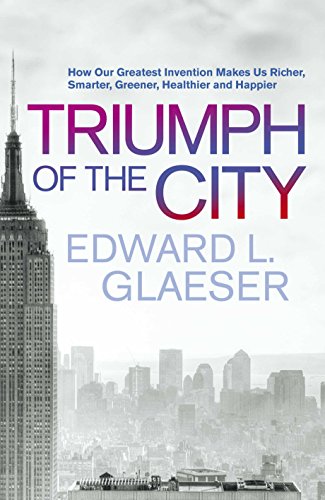 In 2009, for the first time in history, more than half the world's population lived in cities. In a time when family, friends and co-workers are a call, text, or email away, 3.3 billion people on this planet still choose to crowd together in skyscrapers, high-rises, subways and buses. Not too long ago, it looked like our cities were dying, but in fact they boldly threw themselves into the information age, adapting and evolving to become the gateways to a globalized and interconnected world. Now more than ever, the well-being of human society depends upon our knowledge of how the city lives and breathes. Understanding the modern city and the powerful forces within it is the life's work of Harvard urban economist Edward Glaeser, who at forty is hailed as one of the world's most exciting urban thinkers. Travelling from city to city, speaking to planners and politicians across the world, he uncovers questions large and small whose answers are both counterintuitive and deeply significant. Should New Orleans be rebuilt? Why can't my nephew afford an apartment in New York? Is London the new financial capital of the world? Is my job headed to Bangalore? In THE TRIUMPH OF CITIES, Glaeser takes us around the world and into the mind of the modern city - from Mumbai to Paris to Rio to Detroit to Shanghai, and to any number of points in between - to reveal how cities think, why they behave in the manners that they do, and what wisdom they share with the people who inhabit them.

Edward Glaeser is the Fred and Eleanor Glimp Professor of Economics at Harvard University. He has spent his career studying the economics of cities, examining key issues such as housing, segregation, crime and urban innovation, and writing about them for Economix,The New York Times and the Wall Street Journal. He serves as the director of the Taubman Center for State and Local Government and the Rappaport Institute for Greater Boston and is a Senior Fellow at the Manhattan Institute.

1. Triumph of the city

2. Triumph of the City

3. Triumph of the City: How Our Greatest Invention Makes Us Richer, Smarter, Greener, Healthier and Happier

4. Triumph of the City: How Our Greatest Invention Makes Us Richer, Smarter, Greener, Healthier and Happier