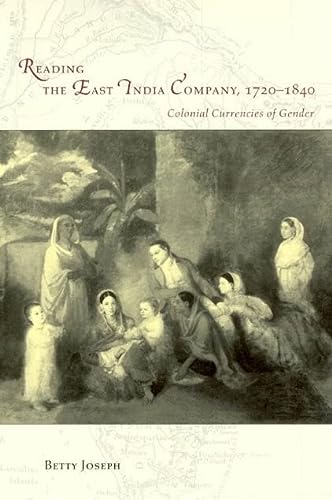 Betty Joseph offers an account of how archives - and the practice of archiving - shaped colonial ideologies in Britain and British-controlled India during the eighteenth and nineteenth centuries.

In Reading the East India Company, Betty Joseph offers an innovative account of how archives—and the practice of archiving—shaped colonial ideologies in Britain and British-controlled India during the eighteenth and nineteenth centuries.

Drawing on the British East India Company's records as well as novels, memoirs, portraiture and guidebooks, Joseph shows how the company's economic and archival practices intersected to produce colonial "fictions" or "truth-effects" that strictly governed class and gender roles—in effect creating a "grammar of power" that kept the far-flung empire intact. And while women were often excluded from this archive, Joseph finds that we can still hear their voices at certain key historical junctures. Attending to these voices, Joseph illustrates how the writing of history belongs not only to the colonial project set forth by British men, but also to the agendas and mechanisms of agency—of colonized Indian, as well as European women. In the process, she makes a valuable and lasting contribution to gender studies, postcolonial theory, and the history of South Asia.