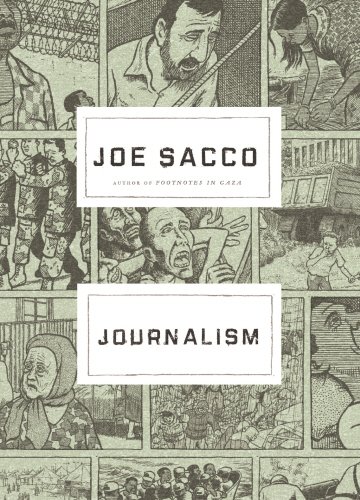 "It is clear that Sacco is one of the masters of his craft." (Alex Hern New Statesman)

"One of the most original cartoonists of the past two decades." (Guardian)

"Sacco is formidably talented. A meticulous reporter...and a gifted artist whose richly nuanced drawings tread a delicate path between cartoonishness and naturalism." (Independent)

"Joe Sacco's brilliant, excruciating books of war reportage are potent territory... He shows how much that is crucial to our lives a book can hold." (New York Times Book Review)

‘The blessing of an inherently interpretive medium like comics is that it hasn't allowed me to . . . make a virtue of dispassion. For good or for ill, the comics medium is adamant, and it has forced me to make choices. In my view, that is part of its message’ – from the preface by Joe Sacco

Over the past decade, Joe Sacco has increasingly turned to short-form com­ics journalism to report from conflict zones around the world. Collected here for the first time, Sacco's darkly funny, revealing reportage confirms his standing as one of the foremost international correspondents working today.

Journalism takes readers from the smuggling tunnels of Gaza to war crimes trials in The Hague, from the lives of India's 'untouchables' to the ordeal of sub-Saharan refugees washed up on the shores of Malta. Sacco also confronts the misery and absurdity of the war in Iraq, including the darkest chapter in recent American history – the torture of detainees.

Vividly depicting Sacco's own interactions with the people he meets, the stories in this remarkable collection argue for the essential truth in comics reportage, an inevitably subjective journalistic endeavour. Among Sacco's most mature and accomplished work, Journalism demonstrates the power of a great comics artist to chronicle lived experience with a force that often eludes other media.