Artículos relacionados a MOD: From Bebop to Britpop, Britain’s Biggest... 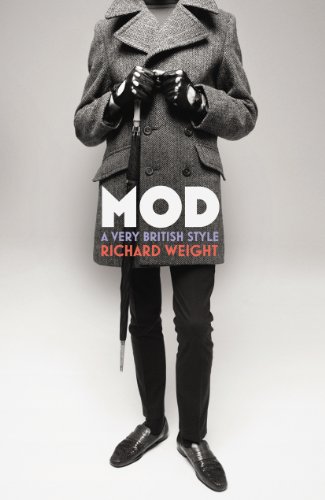 "This [is a] highly entertaining and discursive mixture of social history and cultural theory... As an analysis of Britain’s youth tribes of the past 50 years...Mod: A Very British Style is definitive" (Mick Brown Daily Telegraph)

"Well-written throughout, crackles with reflection on fashion, music and film" (Ian Thompson Observer)

Welcome to the world of the sharp-suited ‘faces’. The Italianistas. The scooter-riding, all-night-dancing instigators of what became, from its myriad sources, a very British phenomenon.

Mod began life as the quintessential working-class movement of a newly affluent nation – a uniquely British amalgam of American music and European fashions that mixed modern jazz with modernist design in an attempt to escape the drab conformity, snobbery and prudery of life in 1950s Britain. But what started as a popular cult became a mainstream culture, and a style became a revolution.

In Mod, Richard Weight tells the story of Britain’s biggest and most influential youth cult. He charts the origins of Mod in the Soho jazz scene of the 1950s, set to the cool sounds of Charlie Parker and Miles Davis. He explores Mod’s heyday in Swinging London in the mid-60s – to a new soundtrack courtesy of the Small Faces, the Who and the Kinks. He takes us to the Mod–Rocker riots at Margate and Brighton, and into the world of fashion and design dominated by Twiggy, Mary Quant and Terence Conran.

But Mod did not end in the 1960s. Richard Weight not only brings us up to the cult’s revival in the late 70s – played out against its own soundtrack of Quadrophenia and the Jam – but reveals Mod to be the DNA of British youth culture, leaving its mark on glam and Northern Soul, punk and Two Tone, Britpop and rave.

This is the story of Britain’s biggest and brassiest youth movement – and of its legacy. Music, film, fashion, art, architecture and design – nothing was untouched by the eclectic, frenetic, irresistible energy of Mod.

Descripción Penguin Random House, 2013. Hardcover. Condición: Good. Ships from the UK. Former Library book. Shows some signs of wear, and may have some markings on the inside. Nş de ref. del artículo: 9436304-6

Descripción Bodley Head, 2013. Hardcover. Condición: Good. Light foxing to page edges Good condition is defined as: a copy that has been read but remains in clean condition. All of the pages are intact and the cover is intact and the spine may show signs of wear. The book may have minor markings which are not specifically mentioned. Most items will be dispatched the same or the next working day. Nş de ref. del artículo: wbb0016288683

Descripción Paperback. Condición: Good. The book has been read but remains in clean condition. All pages are intact and the cover is intact. Some minor wear to the spine. Nş de ref. del artículo: GOR006191661

Descripción Bodley Head, 2013. Hardcover. Condición: Very Good. Very Good: a copy that has been read, but is in excellent condition. Pages are intact and not marred by notes or highlighting. The spine remains undamaged. Most items will be dispatched the same or the next working day. Nş de ref. del artículo: wbb0016321421