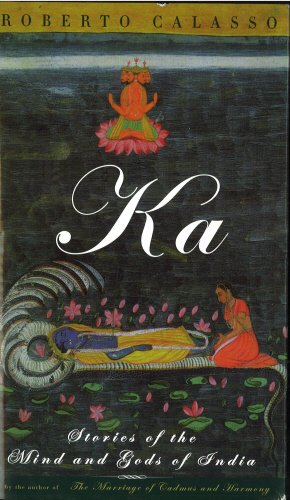 It is the essence of Roberto Calasso's particular genius to have evolved a unique way of reconstructing the imaginative heart of some of the world's greatest cultures. In The Marriage of Cadmus and Harmony it was the 'Greekness' of classical culture; in Ka he gives us the 'Indianness' of the mind of India, but in an Indian way. He does not describe or explain this mental world: he regenerates it through its stories and customs.

Who is Ka? And who is the immense eagle who asks this question, filling the sky, an elephant and a giant turtle in his claws? How can he be the child of woman? Who are these tiny folk he eats? The first impact of Ka is one of tremendous strangeness, bewilderment, disorientation. Slowly, however, the strange becomes familiar and - as Ka folds and enfolds the world of the Deva and the Seven Seers, of Siva, Brahma and Visnu, the wars of the Mahabharata, and finally the advent of the Buddha - we are amazed at our own recognition. These stories lie so close to the grain of our own experience that they confirm, or for the first time articulate, our own deepest perceptions about our condition.

Born in Florence, Roberto Calasso lives in Milan, where he is publisher of Adelphi. He is the author of The Ruin of Kasch and The Marriage of Cadmus and Harmony, which was the winner of France's Prix Veillon and the Priz du Meileur Livre Etranger.

1. Ka : Stories of the minds and gods of India

2. Ka : Stories of the minds and gods of India

3. Ka : Stories of the minds and gods of India [Hardcover] roberto-calasso