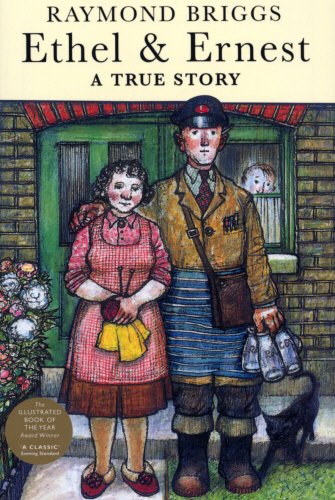 "Briggs has always had the ability to move his readers, but never more powerfully than this." (Stephen Pritchard Guardian)

"As our memory of pre-Niketown Britain fades, we should be grateful that Raymond Briggs is so brilliantly equipped to remind us of what we used to be, and why." (Nick Hornby New York Times)

"Ethel & Ernest imparts, as the best novels do, the sense of lived lives. It’s not too much to say you come to love these people... Briggs’ book earns our tears. Ethel & Ernest is a just about perfect miniature: small in scale, not in spirit." (Charles Taylor Salon)

Utterly original, deeply moving and very funny, Ethel & Ernest is the story of Raymond Brigg`s parents' marriage, from their first chance encounter to their deaths told in Brigg`s unique strip-cartoon format. Nothing is invented, nothing embroidered - this is the reality of two decent, ordinary lives of two people who, as Briggs tells the story, become representative of us all. The book is also social history; we see the dark days of the Second World War, the birth of the Welfare State, the advent of television and all the changes which were so exhilarating and bewildering for Ethel and Ernest.

A marvellous, life-enhancing book for all ages.