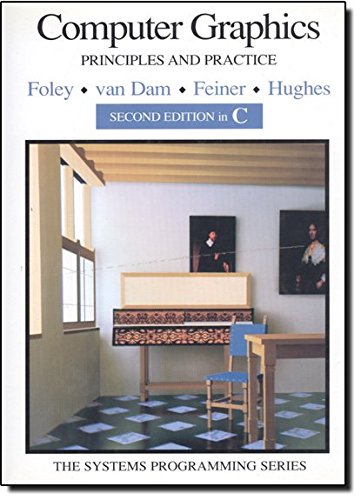 The best-selling book on computer graphics is now available in this C-language version. All code has been converted into C, and changes through the ninth printing of the second edition have been incorporated. The book's many outstanding features continue to ensure its position as the standard computer graphics text and reference. By uniquely combining current concepts and practical applications in computer graphics, four well-known authors provide here the most comprehensive, authoritative, and up-to-date coverage of the field. The important algorithms in 2D and 3D graphics are detailed for easy implementation, including a close look at the more subtle special cases. There is also a thorough presentation of the mathematical principles of geometric transformations and viewing. In this book, the authors explore multiple perspectives on computer graphics: the user's, the application programmer's, the package implementor's, and the hardware designer's. For example, the issues of user-centered design are expertly addressed in three chapters on interaction techniques, dialogue design, and user interface software. Hardware concerns are examined in a chapter, contributed by Steven Molnar and Henry Fuchs, on advanced architectures for real-time, high performance graphics. The comprehensive topic coverage includes: *Programming with SRGP, a simple but powerful raster graphics package that combines features of Apple's QuickDraw and the MIT X Window System graphics library. *Hierarchical, geometric modeling using SPHIGS, a simplified dialect of the 3D graphics standard PHIGS. *Raster graphics hardware and software, including both basic and advanced algorithms for scan converting and clipping lines, polygons, conics, spline curves, and text. *Image synthesis, including visible-surface determination, illumination and shading models, image manipulation, and antialiasing. *Techniques for photorealistic rendering, including ray tracing and radiosity methods. *Surface modeling with parametric polynomials, including NURBS, and solid-modeling representations such as B-reps, CSG, and octrees. *Advanced modeling techniques such as fractals, grammar-based models, particle systems. *Concepts of computer animation and descriptions of state-of-the-art animation systems. Over 100 full-color plates and over 700 figures illustrate the techniques presented in the book. 0201848406B04062001

James D. Foley (Ph.D., University of Michigan) is the founding director of the interdisciplinary Graphics, Visualization & Usability Center at Georgia Institute of Technology, and Professor of Computer Science and of Electrical Engineering. Coauthor with Andries van Dam of Fundamentals of Interactive Computer Graphics, Foley is a member of ACM, ACM SIGGRAPH, ACM SIGCHI, the Human Factors Society, IEEE, and the IEEE Computer Society. He recently served as Editor-in-Chief of ACM Transactions on Graphics, and is on the editorial boards ofComputers and Graphics, User Modeling and User-Adapted Interaction, andPresence. His research interests include model-based user interface development tools, user interface software, information visualization, multimedia, and human factors of the user interface. Foley is a Fellow of the IEEE, and a member of Phi Beta Kappa, Tau Beta Phi, Eta Kappa Nu, and Sigma Xi. At Georgia Tech, he has received College of Computing graduate student awards as Most Likely to Make Students Want to Grow Up to Be Professors, Most Inspirational Faculty Member, the campus Interdisciplinary Activities Award, and the Sigma Xi Sustained Research Award. In 1997, Foley received the SIGGRAPH Steven A. Coons Award. Andries van Dam (Ph.D., University of Pennsylvania) was the first chairman of the Computer Science Department at Brown University. Currently Thomas J. Watson, Jr. University Professor of Technology and Education and Professor of Computer Science at Brown, he is also Director of the NSF/ARPA Science and Technology Center for Computer Graphics and Scientific Visualization. His research interests include computer graphics, hypermedia systems, and workstations. He is past Chairman of the Computing Research Association, Chief Scientist at Electronic Book Technologies, Chairman of Object Power's Technical Advisory Board, and a member of Microsoft's Technical Advisory Board. A Fellow of both the IEEE Computer Society and of ACM, he is also cofounder of ACM SIGGRAPH. Coauthor of the widely used book Fundamentals of Interactive Computer Graphics with James Foley, and ofObject-Oriented Programming in Pascal: A Graphical Approach, with D. Brookshire Conner and David Niguidula, he has, in addition, published over eighty papers. In 1990 van Dam received the NCGA Academic Award, in 1991, the SIGGRAPH Steven A. Coons Award, and in 1993 the ACM Karl V. Karlstrom Outstanding Educator Award. Steven K. Feiner (Ph.D., Brown University) is Associate Professor of Computer Science at Columbia University, where he directs the Computer Graphics and User Interfaces Lab. His current research focuses on 3D user interfaces, virtual worlds, augmented reality, knowledge-based design of graphics and multimedia, animation, visualization, and hypermedia. Dr. Feiner is on the editorial boards of ACM Transactions on Graphics, IEEE Transactions on Visualizations and Computer Graphics, and Electronic Publishing, and is on the executive board of the IEEE Technical Committee on Computer Graphics. He is a member of ACM SIGGRAPH and the IEEE Computer Society. In 1991 he received an ONR Young Investigator Award. Dr. Feiner's work has been published in over fifty papers and presented in numerous talks, tutorials, and panels. John F. Hughes (Ph.D., University of California, Berkeley) is an Assistant Professor of Computer Science at Brown University, where he codirects the computer graphics group with Andries van Dam. His research interests are in applications of mathematics to computer graphics, scientific visualization, mathematical shape description, mathematical fundamentals of computer graphics, and low-dimensional topology and geometry. He is a member of the AMS, IEEE, and ACM SIGGRAPH. His recent papers have appeared in Computer Graphics, and in Visualization Conference Proceedings. He also has a long-standing interest in the use of computer graphics in mathematics education. 0201848406AB04062001

Descripción Addison-Wesley Professional. soft cover. Condición: New. International Edition. No supplemental materials. International Editions may have a different cover or ISBN but generally have the exact same content as the US edition, just at a more affordable price. In some cases, end of chapter questions may vary slightly from the US edition. International Editions are typically printed in grayscale, and likely will not have any color throughout the book. New. Books ship from multiple locations depending on availability. All orders are shipped with tracking information. We take pride in our customer service. Please contact us if you have any questions regarding this listing. Nş de ref. del artículo: 12099