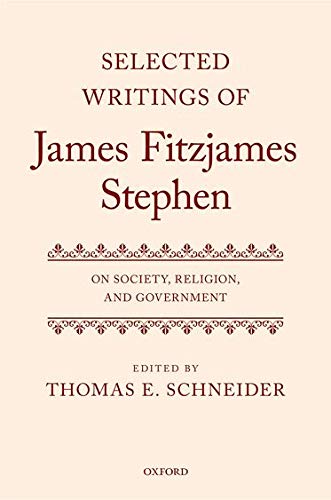 Reseńa del editor:
James Fitzjames Stephen (1829-1894) is remembered as a judge, legal historian, and the author of Liberty, Equality, Fraternity, a reply to J. S. Mill's late works. He is less well remembered for his journalism, though it earned him a reputation among his contemporaries as one of the most trenchant writers on topics ranging across the social, religious, political, moral, and philosophical questions debated in his time. It was largely in his journalistic writing that Stephen set forth his views on these questions. Despite such a reputation, however, only a small proportion of this writing was collected during his lifetime, and very little has been republished since his death.

Selected Writings of James Fitzjames Stephen: On Society, Religion, and Government includes thirty-five essays expressing Stephen's views on the questions of his day, which have not lost their interest in ours. He wrote at a time when much of the finest writing in English was published in periodicals, often anonymously. The essays in this volume are drawn mostly from Stephen's unsigned contributions to the Saturday Review, with additions, both signed and unsigned, from other periodicals, extending from the 1850s to the 1880s.
Biografía del autor:
Thomas E. Schneider has taught political science at Boston University, Bowdoin College, and Emory University. He was a postdoctoral fellow at the Editorial Institute, Boston University, 2004-2006.

On Society, Religion, and Government