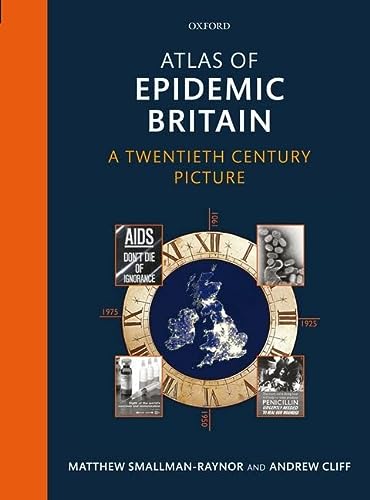 Matthew Smallman-Raynor and Andy Cliff's Atlas of Epidemic Britain is a beautiful book ... beautifully printed in full colour ... the atlas was awarded the British Medical Association Medical Book of the year award for 2013, a distinction that is well earned (Danny Dorling, Environment and Planning A)

This book would make a valuable addition to any medical practitioner's bookshelf. (David J. M. Wright, The Lancet)

This book - which provides a century of change in Britain's history of epidemics - is truly one of a kind in scope and presentation. The authors Matthew Smallman-Raynor and Andrew Cliff have done extensive research to unearth facts on the history of diseases that plagued the British Isles in the 1901-2000 period. We applaud their valuable contributions to the growth of knowledge in this area, and urge readers to acquire this unique book. (Biz India, March 2013)

Over a hundred years have passed since Charles Creighton's A History of Epidemics in Britain was published. Then, epidemics of infectious diseases accounted for a third of all deaths in the British Isles, caused principally by familiar infections like measles, whooping cough, scarlet fever, and smallpox, as well as by a host of now unfamiliar conditions in Britain like plague, cholera and typhus.

By the beginning of the twenty-first century, mortality from infectious diseases had dropped to less than one in ten thousand of all deaths. But an invidious change had been taking place. Many of the old infectious diseases had been pushed into retreat by improvements in health care, delivered for three generations by a National Health Service, socio-economic progress, and medical advances - particularly mass vaccination which caused morbidity and mortality from a series of vaccine-preventable infections to implode. The vacuum generated was filled not just by cancers and cardio-vascular conditions. To add to the mix, infectious disease morbidity and mortality began to increase again, caused by a complex mixture of apparently new pathogens like bird flu, swine flu, variant Creutzfeld-Jacob disease (vCJD), Escherichia coli O157:H7, HIV, and hospital-based infections.

Using over 300 new maps, charts, photographs and associated text, this full-colour Atlas views a century of change - the ebb and flow of infection - in Britain's epidemic landscape. It maps and interprets the complex time-space tapestry woven in twentieth century Britain by the uneven retreat of some infectious diseases, the emergence of new infections and the re-emergence of certain historical plagues. In each chapter, representative maps are accompanied by micrographs of the biological agents of the diseases mapped, illustrations of the environments in which they occur, the impacts they have had, and the pioneers who unravelled their complex life and death cycles. The accompanying text summarizes the epidemics each pathogen has caused in the British Isles, its current status, and the probability of future control.