Artículos relacionados a The Spinning World: A Global History of Cotton Textiles,... 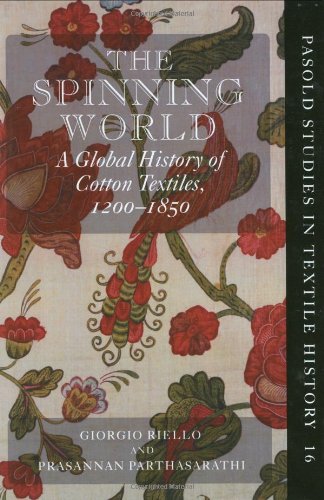 A must-have for any academic library and a required resource for any textile historian. (The Textile Society)

...a collection of essays of high factual value and close scrutiny of process, its revisionism lying in its world-ranging approach to a subject which has largely been viewed from a Western perspective. (Jane Jakeman, Times Literary Supplement)

This comprehensive collection...offers a perspective unfamiliar to many historians working on the British industrial revolution period, but provides vital contextualisation. (Northern History.)

Cotton textiles were the first good to achieve a truly global reach. For many centuries muslins and calicoes from the Indian subcontinent were demanded in the trading worlds of the Indian Ocean and the eastern Mediterranean. After 1500, new circuits of exchange were developed. Of these, the early-modern European craze for Indian calicoes and the huge nineteenth-century export trade in Lancashire goods, and subsequent deindustrialization of the Indian subcontinent, are merely the best known. These episodes, although of great importance, far from exhaust the story of cotton. They are well known because of the enormous research energy that has been devoted to them, but other important elements of cotton's long history are deserving of similar attention.

The purpose of this collection of essays is to examine the history of cotton textiles at a global level over the period 1200-1850. This volume provides new answers to two questions: what is it about cotton that made it the paradigmatic first global commodity? And second, why did cotton industries in different parts of the world follow different paths of development?

Included in this second question is, of course, the problem of the so-called 'great divergence' that suggests that Europe and Asia followed a common path of economic development until the end of the eighteenth century. Cotton textiles have been central in explaining the nature, timing and effects of a 'divergence' in the nineteenth.

A volume of this sort is timely for many reasons, not least of which is the growing interest in global history. Textiles remain one of the most important manufactured commodities in debates about economic, social and cultural change across the globe. By adopting a long historical view and a broad geographical viewpoint, this book wishes to avoid a Eurocentric perspective that has long dominated debates over the birth and rise of the cotton textiles industry in Europe.

Empirically this book brings together, and adds to, the current state of knowledge on a number of questions related to the history of cotton textiles. The outlines of the cotton industry in medieval and early modern times, whether in southern Europe, central Africa, west Asia or the Indian subcontinent, are known only in the sketchiest of terms. The relationship between cotton textiles and those made from other fibres such as wool, linen, and silk is poorly understood. And there has been a woeful neglect of the cloth made from the great mixtures of cotton and linen, cotton and wool, and cotton and silk, which were mainstays of textile manufacturing from Europe to Bengal. And the long history of commerce and connections between the producers and consumers of cotton textiles in Asia, Africa, the Americas and Europe remains under-researched. As a consequence, even the Indian trade in cotton textiles and the rise of the Lancashire cotton industry are not fully understood within their larger temporal and regional and global contexts.

The volume draws upon papers that were presented at a conference on "Cotton Textiles as a Global Industry" held in Padua, Italy, in November 2005 and a workshop on "Global Histories of Economic Development: Cotton Textiles and Other Global Industries in the Early Modern Period" held at the Fondation des Treilles, France, in March 2006. Both meetings were sponsored and organised by the Global Economic History Network of the London School of Economics and were held in preparation for Session 59 on "Cotton Textiles as a Global Industry" for the XIV International Economic History Association Congress held in Helsinki in late August 2006.

Essays included in the volume are authored by 19 scholars from eight different nations, all of whom are specialists in the study of textiles. They are drawn from a range of sub-disciplines within history and bring together their areas and periods of specialization to provide a global history. Therefore, the volume covers a wide variety of approaches to the study of history, which is essential for constructing a global picture. Some of the contributors are internationally well known for their publications on the history of cotton, as well as other textiles in different world areas. The volume also draws upon the research of a number of younger scholars whose work will form the core of the future development of textile history as a global discipline.