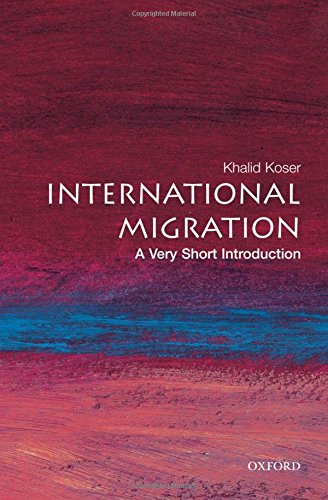 Why has international migration become an issue of such intense public and political concern? How closely linked are migrants with terrorist organizations? What factors lie behind the dramatic increase in the number of women migrating?

This Very Short Introduction looks at the phenomenon of international human migration ― both legal and illegal ― to reveal that migration actually presents opportunities that must be taken advantage of in light of the current economic climate. The author debunks myths such as the claim that migrants take jobs away from local workers, and that they take advantage of the health care system and western living conditions without returning any benefits of their own, and reveals that society as we now know it can not function without them. Not only do migrants fill a key gap in the domestic labour market, they also have a significant impact on the economies of their home countries ― in places such as Mexico and the Philippines, the remittances they send home often exceed official development aid. Using interviews with migrants from around the world, the author presents the human side of topics such as asylum and refugees, human trafficking, migrant smuggling, development, and the international labour force. His goal throughout is to allow readers to see beyond the negative spin usually given the subject by the media and politicians, and come to their own conclusions on the international migration situation today.

ABOUT THE SERIES: The Very Short Introductions series from Oxford University Press contains hundreds of titles in almost every subject area. These pocket-sized books are the perfect way to get ahead in a new subject quickly. Our expert authors combine facts, analysis, perspective, new ideas, and enthusiasm to make interesting and challenging topics highly readable.

Khalid Koser is Lecturer in Human Geography at University College London. In 2004-05 he was seconded to the Global Commission on International Migration, where he helped write the Commission's report for the UN Secretary-General. He has published widely on international migration and refugees, and is editor or co-editor of four books on the subject including New Approaches to Migration (Routledge, 2002), and New African Diasporas(2003). He is currently Vice-President of the International Association for the Study of Forced Migration, and on the editorial board for the journal Ethnic and Racial Studies. He has had extensive media experience throughout the world, with interviews appearing in broadsheets including The Observer, The Guardian and The Economist.