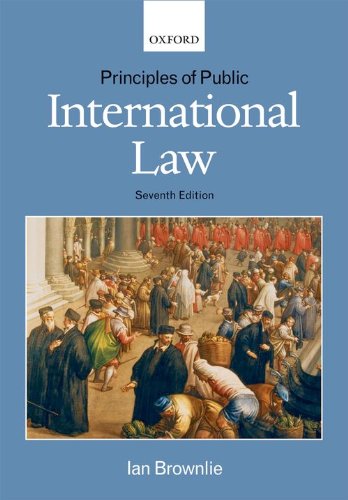 Principles of Public International Law has been shaping the study and application of international law for over 40 years. Written by a world-renowned expert, this book was the first to bring human rights into the mainstream of international law. This seventh edition, fully updated since 2003, continues to provide the balance, clarity and expertise expected by Brownlie readers. The depth of knowledge displayed by the author, along with the detailed referencing and logical structure, make this title an indispensible resource for students, scholars and practitioners working in or studying international law.

The Late Ian Brownlie, CBE, QC, was a Barrister in practice at Blackstone's Chambers in London and Distinguished Fellow of All Souls College, Oxford. He was re-elected to the International Law Commission for a third five-year term in 2006 on the nomination of the Governments of the United Kingdom, Canada, New Zealand and India, and was elected Chairman in 2007.