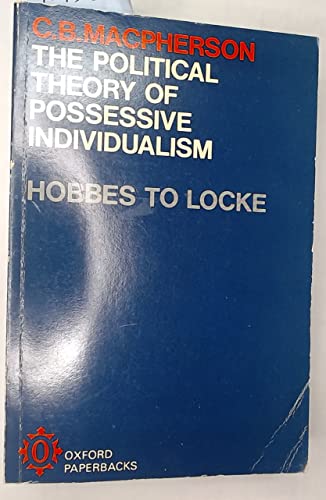 This seminal work by political philosopher C.B. Macpherson was first published by the Clarendon Press in 1962, and remains of key importance to the study of liberal-democratic theory half-a-century later. In it, Macpherson argues that the chief difficulty of the notion of individualism that underpins classical liberalism lies in what he calls its "possessive quality"--"its conception of the individual as essentially the proprietor of his own person or capacities, owing nothing to society for them." Under such a conception, the essence of humanity becomes freedom from dependence on the wills of others; society is little more than a system of economic relations; and political society becomes a means of safeguarding private property and the system of economic relations rooted in property. As the New Statesman declared: "It is rare for a book to change the intellectual landscape. It is even more unusual for this to happen when the subject is one that has been thoroughly investigated by generations of historians. . . Until the appearance of Professor Macpherson's book, it seemed unlikely that anything radically new could be said about so well-worn a topic. The unexpected has happened, and the shock waves are still being absorbed." A new introduction by Frank Cunningham puts the work in a twenty-first-century context.

C.B. Macpherson (1911-1987) was Professor of Political Science at the University of Toronto. Widely regarded as Canada's pre-eminent political theorist of the twentieth century, he was the author of numerous books, including The Life and Times of Liberal Democracy and The Real World of Democracy, and was named to the Order of Canada, the country's highest civilian honor.