Artículos relacionados a A Dictionary of Law (Oxford Quick Reference) 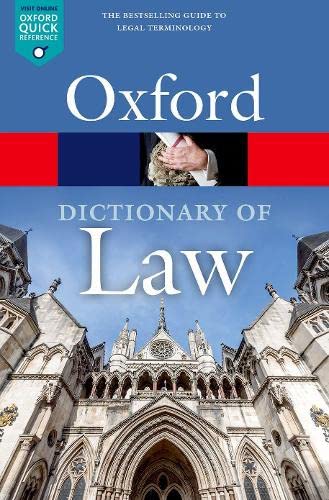 Review from previous edition If legal language is a fog, this is a valuable flashlight (Times Educational Supplement)

The entries are clearly drafted and succinctly written ... Precision for the professional is combined with a layman's enlightenment. (Times Literary Supplement)

It's like having your own lawyer on the bookshelf and is a handy aide for the professional and amateur alike. (Northern Echo)

This bestselling dictionary is an authoritative and comprehensive source of jargon-free legal information. It contains over 4,800 entries that clearly define the major terms, concepts, processes, and the organization of the English legal system.

Now in its ninth edition, it has been fully updated to incorporate recent case law and the latest legislation, such as the Modern Slavery Act 2015, the Brexit legislation, and changes in consumer, tax, and family law. Over 100 new entries have been added, including Article 50, Brexit, the Marriage (Same Sex Couples) Act 2013, and intercountry adoption. In addition, there is a useful Writing and Citation Guide that specifically addresses problems and established conventions for writing legal essays and reports. Now providing more information than ever before, this edition features recommended web links for many entries, which are accessed and kept up to date via the Dictionary of Law companion website.

Described by leading university lecturers as 'the best law dictionary' and 'excellent for non-law students as well as law undergraduates', this classic dictionary is an invaluable source of legal reference for professionals, students, and anyone else needing succinct clarification of legal terms. Focusing primarily on English law, it also provides a one-stop source of information for any of the many countries that base their legal system on English law.

5. A Dictionary Of Law

Descripción 2018. Paperback. Condición: New. 9th. Paperback. This bestselling dictionary is an authoritative and comprehensive source of jargon-free legal information. It contains over 4,800 entries that clearly define the major terms, concepts, pro.Shipping may be from multiple locations in the US or from the UK, depending on stock availability. 768 pages. 0.530. Nş de ref. del artículo: 9780198802525