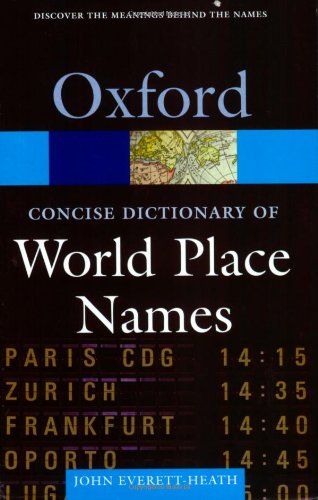 Is Abadan in Iraq named after a holy man from the 8th century, or a guard post? Or does it mean "a place from which you can see water"? You'll find the answer in this unique dictionary. Every populated place, however small, has a name, and every name is chosen for a reason. This brand new book gives the history, meanings, and origin of an enormous range of country, region, island, city, and town names from across the world, as well as the name in the local language. It also includes key historical facts associated with many place names. Place-names are continually changing. New names are adopted for many different reasons such as invasion, revolution and decolonization. This dictionary includes selected former names, and, where appropriate, some historical detail to explain the transition. The names of places often offers a real insight into the places themselves, revealing religious and cultural traditions, the migration of peoples, the ebb and flow of armies, the presence of explorers, local languages, industrial developments and topography. Superstition and legend can also play a part. All this fascinating detail is included in the Concise Dictionary of World Place Names. In addition to the entries themselves, the dictionary includes two appendices: a glossary of foreign word elements which appear in place names and their meanings, and a list of personalities and leaders from all over the world who have influenced the naming of places. Containing over 8,000 names, from Aachen to Zyrardów, this is a unique and fascinating guide for geographers, travellers, and all with an interest in current world affairs.