Artículos relacionados a The Social World of an English Crown Court: Witnesses...

The Social World of an English Crown Court: Witnesses and Professionals in the Crown Court Centre at Wood Green (Oxford Socio-Legal Studies) 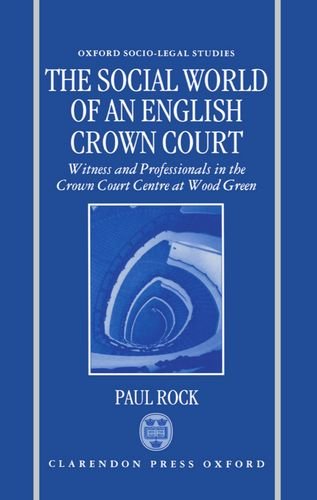 Excellent ... once I started reading it, I found it compelling ... I found the case study both fascinating and horrific ... a conspicuous example of ethnography at its best.'Dr P Waddington, University of Reading

`It should be of interest to anyone seeking to understand the working of the criminal justice system in England and Wales ... a meticulously observed account which is both fascinating in itself and capable of providing a solid base for his own and others' analysis.'British Journal of Sociology

`an unusual insight into the development of criminal-justice policy, legislation and practice ... important reading for scholars and practitioners, and perhaps especially for politicians and officials ... Paul Rock's book is a shrewd analysis of the dynamics of policy-making as they relate to the interests of victims and witnesses'Times Literary Supplement

`the first detailed analysis in this country of the position of witnesses in an English Crown Court ... As a detailed testament of the limited role the victim has in the English Crown Court, the value of Rock's work is that it raises questions not just about the role of the victim-witness in the English legal system but also about the structure of adversarial proceedings throughout the common law world'British Journal of Criminology

`if what you want is a detailed description of the life and dynamics of a rather dull little Crown Court which incorporates everyone from the judges to the cleaners, and which despite being written by a sociologist is relatively clear and comprehensible, then this is the book for you'LCCJ Newsletter

`Rock's own contributions stand as a notable exception to his generalizations, and this book can only add to his reputation as one of the most original writers in this field ... Any US sociologist with an interest in the administration of justice is likely to profit from Rock's dissection of the ways in which we do things on this side of the pond and to be provoked to reflect on those unnoticed features of organizational life that a foreign account can bring to light.'Contemporary Sociology

`should be of interest to anyone seeking to understand the working of the criminal justice system in England and Wales ... a highly detailed observational analysis of the way in which witnesses are routinely excluded from the insiders' world ... Rock provides a meticulously observed account which is both fascinating in itself and capable of providing a solid basis for his own and others' analysis'British Journal of Sociology

The Social World of an English Crown Court is the first ethnographic study of a Crown Court Centre. It also describes the origins and early history of a pioneering project to support victims and prosecution witnesses appearing before the court–the Witness Support Project.

Paul Rock analyses the major divide which exists in the life of the court between professional insiders and public outsiders. He describes how this divide created problems for witnesses and how the project set out to alleviate this. He provides details of how this division is built into court architecture, administration, and social relations, and examines how it stems from the preoccupation of court officials with the control of knowledge, public order, and emotion.

2. THE SOCIAL WORLD OF AN ENGLISH C

3. The Social World of an English Crown Court: Witness and Professionals in the Crown Court Centre at Wood Green