Artículos relacionados a World Musics in Context: A Comprehensive Survey of...

World Musics in Context: A Comprehensive Survey of the World's Major Musical Cultures 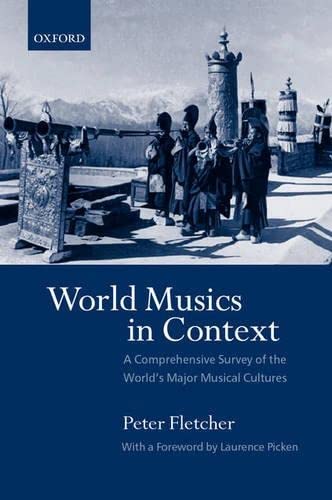 The readable style of Peter Fletcher's World Musics in Context [makes] it accessible to the general reader. (Classical Music)

Substantial ... a labour of love ... Fletcher provides some stimulating examples and original observations during the course of his discussion. (the world of music)

This monumental landmark of a musical study ... Fletcher writes with an extraordinary objectivity with regard to every culture he approaches, and manages to display a deep respect for and understanding of the cultures and the music makers ... This book is an epic in sociomusicology. (Classical Music)

The scope is impressive ... He [Fletcher] provides as illuminating, clear and well-written introduction as any to the musics of the Indian subcontinent, South and East Asia, China and Latin America, among others ... The book's unconventional narrative is undoubtedly stimulating. (Times Higher Education Supplement)

Wide-ranging ... should prove useful to generations of students seeking a wide-ranging look at the field, as well as to a more general readership. (Times Higher Education Supplement)

Perverse, provocative, and remarkably stimulating ... With its politically acerbic commentaries, and its delightful dips into music's exotic by-ways, this book deserves to be read for a long time to come. (Michael Church, Financial Times)

A monumental work and a very ambitious undertaking for a single author. (Josef Pacholczk, Professor of Musicology, University of Maryland)

This book contains a wide-ranging survey of musics of the world, in historical and social contexts, from ancient times to the present day. It starts by describing aspects of musical style and function in relation to the early developments of civilisations, as background to a study of later transformations. It then describes, in some detail, musical traditions of Africa and Asia, in relation to history/geography and to other aspects of culture. European music is subsequently treated similarly, and in relation to music-cultures elsewhere. A further section examines the consequences of Europe's appropriation of the Americas, and describes popular musical styles in both Latin America and the USA. The final section considers the nature of tradition and change, examines some African and Asian musical styles in their colonial and post-colonial contexts, and considers, in broad historical perspective, the effects of Westernisation. A concluding essay examines the consequences for the West of global Westernisation, and of increasing cultural interchange. The book includes a Foreword by Laurence Picken, an essay that presents a unique view of music and ethnomusicology by one of the most distinguished scientists and musicologists of our time.

In part a compendium of information currently available, in part a dialectical examination of musical causation and function, this book aims to lead students, teachers, and those who practise Western music towards a deeper understanding of the various musical traditions that contribute to the modern, multi-cultural environment. The author's aim throughout has been to achieve clarity in the writing and to make the book accessible to those with no training in ethnomusicology.

1. World Musics in Context: A Comprehensive Survey of the World's Major Musical Cultures

2. WORLD MUSICS IN CONTEXT: A COMPR

3. WORLD MUSICS IN CONTEXT: A COMPR