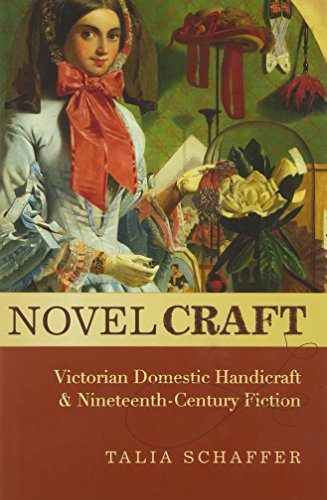 Talia Schaffer's Novel Craft is an original contribution to the field pf Victorian studies with its focus on what the author herself acknowledges is a neglected and undervaluded cultural practise of the period ... her book is a valuable contribution to teh field of nineteeth-century cultural and literary studies and more generally, to continuing debates about the nature, role and purpose of handicraft in contemporary society. (Phillippa Bennett, The Journal of William Morris Studies)

Novel Craft explores an intriguing and under-studied aspect of cultural life in Victorian England: domestic handicrafts, the decorative pursuit that predated the Arts and Crafts movement. Talia Schaffer argues that the handicraft movement served as a way to critique the modern mass-produced commodity and the rapidly emerging industrial capitalism of the nineteenth century. Her argument is illustrated with the four pivotal novels that form her study's core-Gaskell's Cranford, Yonge's The Daisy Chain, Dickens's Our Mutual Friend, and Oliphant's Phoebe Junior. Each features various handicrafts that subtly aim to subvert the socioeconomic changes being wrought by industrialization. Schaffer goes beyond straightforward textual analysis by shaping each chapter around the individual craft at the center of each novel (paper for Cranford, flowers and related arts in The Daisy Chain, rubbish and salvage in Our Mutual Friend, and the contrasting ethos of arts and crafts connoisseurship in Phoebe Junior). The domestic handicraft also allows for self-referential analysis of the text itself; in scenes of craft production (and destruction), the authors articulate the work they hope their own fictions perform. The handicraft also becomes a locus for critiquing contemporary aesthetic trends, with the novels putting forward an alternative vision of making value and understanding art. A work that combines cultural history and literary studies, Novel Craft highlights how attention to the handicraft movement's radically alternative views of materiality, consumption, production, representation, and subjectivity provides a fresh perspective on the major changes that shaped the Victorian novel as a whole.