Artículos relacionados a How to Do Things with Fictions

Landy, Joshua How to Do Things with Fictions

How to Do Things with Fictions 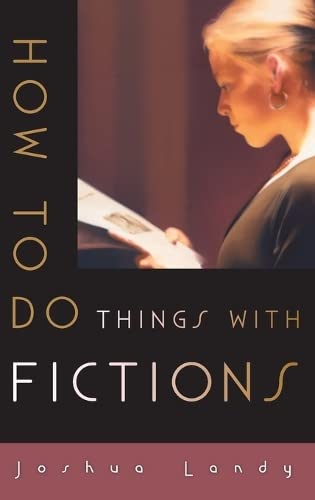 Joshua Landy's captivating book, How to Do Things with Fictions, dispenses with the usual pieties about what we stand to gain from literary works. In their place, he advances a compelling theory that reveals as much about what fiction can do for us as it does about what we can do with fiction. (Elaine Auyoung, MLN)

In his eminently readable and concise new book, Professor Landy has made an important contribution to the increasingly substantial field of literary criticism devoted to theorizing the relationship between ethics and literature. (Patrick Fessenbecker, Journal of Literary Theory)

accessible, elegantly written ... Landy's lively discussions of Mark, Plato, Mallarme, and Samuel Beckett (not to mention French stage magician Jean Robert-Houdin and numerous other figures) are sensitive and provocative ... It is rare to read a work in which the sense comes through so fully of what it must be like to sit in the author's classroom; in this case, it is clear that Stanford students enjoy an intellectual treat, one now available to many others ... Essential. (D.L. Patey, Choice)

[Landy's] responses to the texts are personal, lively and - in parts - spectacularly acute. He is at his best as a close reader when he is examining Mark's gospel, or discussing "the cosmic magnitude" of Mallarmé's "ses purs ongles" sonnet. (Stephen Abell, The Guardian)

Why did Jesus speak in parables? Why does Plato's Socrates make bad arguments? Why do we root for criminal heroes? In mummy movies, why is the skeptic always the first to go? Why don't stage magicians even pretend to summon spirits any more? Why is Samuel Beckett so confusing? And why is it worth trying to answer questions like these?

Witty and approachable, How to Do Things with Fictions challenges the widespread assumption that literary texts must be informative or morally improving to be of any real benefit. It reveals that authors are often best thought of not as entertainers or as educators but as personal trainers of the brain, putting their willing readers through exercises that fortify their mental capacities.

This book is both deeply insightful and rigorously argued, and the journey delivers plenty of surprises along the way-that moral readings of literature can be positively dangerous; that the parables were deliberately designed to be misunderstood; that Plato knowingly sets his main character up for a fall; that we can sustain our beliefs even when we suspect them to be illusions; and more. Perhaps best of all, though, the book is written with uncommon verve and a light touch that will satisfy the generally educated public and the specialist reader alike. In How to Do things with Fictions, Joshua Landy convincingly shows how the imaginative writings sitting on our shelves may well be our best allies in the struggle for more rigorous thinking, deeper faith, greater peace of mind, and richer experience.

1. How to Do Things with Fictions [Hardcover] Landy, Joshua