Artículos relacionados a The Left Hand of Creation: The Origin and Evolution...

Barrow, John D.; Silk, Joseph The Left Hand of Creation: The Origin and Evolution of the Expanding Universe

The Left Hand of Creation: The Origin and Evolution of the Expanding Universe 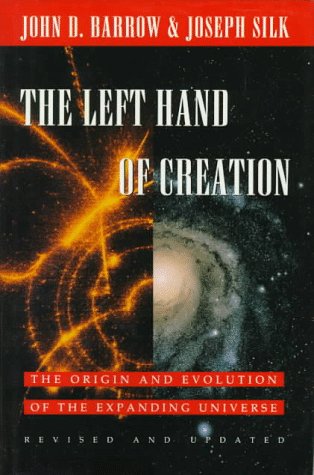 Consider the ghostly neutrino. This elementary, subatomic particle carries with it not only an uncanny reminder of a time eons ago when symmetries were perfect, but also a clue as to how they came to be broken. For every neutrino that now spins to the left, there was once one that spun to the right: these parallel twins were destroyed in the "Big Bang," that cosmic apocalypse that, most scientists now agree, created the universe. And this decay of symmetry is reflected in the building blocks of organic life as well. The helical structures of our own genetic material spiral to the left; no right-turning counterparts exist. The left hand of creation has a long reach indeed, extending from the beginning of time to the miracles of life we witness everyday.
In this provocative and widely praised volume, two internationally acclaimed astronomers show nonspecialist readers how the latest scientific research is helping to solve one of humankind's oldest riddles: the origins of the universe. In clear, nontechnical terms, John D. Barrow and Joseph Silk explain how the physics of elementary particles and the scenarios of cosmology converge in theories that illuminate the beginnings, the evolution, and the possible future of our world and its seemingly infinite neighbors. In the process, they lead us along an amazing path of discovery. We examine the black body radiation still detectable in space today (once the predominant constituent of the universe, now a cosmic fossil of the primeval fireball), explore the Milky Way (with more stars swirling around its center than people who ever lived on Earth), and find that all we see around us is inextricably linked to the exceedingly remote past.
As it traces the origins and development of the universe, The Left Hand of Creation asks some compelling questions. What was the beginning of time like? Was it a time of chaos or of smooth transition? Was it unfathomably hot or inconceivably cold? In attempting to answer these and other questions, Barrow and Silk effortlessly cover the entire spectrum of modern theory, making even the most arcane and difficult accessible to the layperson. They offer succinct, readable accounts of such cutting-edge fields of inquiry as quantum physics, quark theory, particle physics, and astronomy, to name but a few. And they also introduce us to the scientists whose collective genius made modern cosmological study possible in the first place. There is Edwin Hubble, whose Red Shift Theory proved that the universe is expanding; the eighteenth-century English clergyman John Michell, whose revolutionary ideas about gravity predicted the discovery of black holes by American physicist John Wheeler some two centuries later; and, of course, the titanic figure of Einstein, whose Theory of Relativity looms behind virtually every breakthrough in modern physics.
A book for anyone who has ever contemplated how the world came to be, or has simply awestruck by a starry sky at night, The Left Hand of Creation offers a treasure trove of insights and explanations.

1. The Left Hand of Creation: The Origin and Evolution of the Expanding Universe

2. The Left Hand of Creation: The Origin and Evolution of the Expanding Universe Barrow, John D. and Silk, Joseph

3. The Left Hand of Creation: The Origin and Evolution of the Expanding Universe