Artículos relacionados a A Day in Our Life

O'Crohan, Sean A Day in Our Life

A Day in Our Life 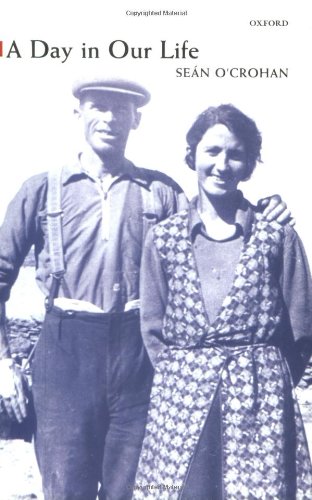 The island of the Great Blasket lies three miles off the Kerry coast of Ireland, at the westernmost tip of Europe. Virtually unknown before this century, it was to produce a rich and extraordinary flowering of literature that has made it famous throughout the world. One of those who wrote about life in that tiny, remote community was Tomas O'Crohan, the author of 'The Islandman'. 'A Day in Our Life', by his son Sean, is by way of an epilogue to the story of the Gaelic-speaking Blasket, for it tells how, in its dying days, the islanders settled on the nearby mainland. The book provides vivid sketches of West Kerry after the Second World War. Accepting as inevitable the changes that have been brought to the old Gaelic world, Sean O'Crohan surveys the mainland scene wit the ironical eye of the islander. He writes with robust humour and an immediacy that derives from the oral tradition out of which he came. His are flesh and blood characters, like Bod, Com, and the Captain, who, after a long night at sea come alive again to drink, dance, and play the fiddle. To many brought up today in an acquisitive society the community values of the Great Blasket seem attractive. Sean O'Crohan was a realist and knew that life on the island could not continue. Nevertheless he was to conclude, in the very last words he wrote, 'I saw with my own eyes on the Western Island the finest life I would ever see'.

About the Author Sean O'Crohan (1898-1975) lived on the island of the Great Blasket until 1942, when he moved with his family to the mainland. He was also the author of Westerly Breeze, a compilation of Blasket lore. About the Translator Tim Enright is a retired classics teacher who has also translated A Pity Youth Does Not Last and Island Cross-Talk by Tomas O'Crohan.