ArtŪculos relacionados a DIARY OF A WIMPY KID DOG DAYS: 4 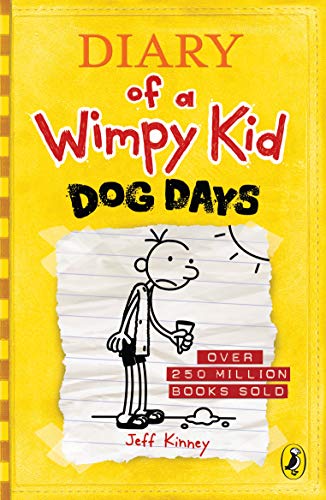 Kinney is right up there with J K Rowling as one of the bestselling children's authors on the planet. (Independent)

The most hotly anticipated children's book of the year is here - Diary of a Wimpy Kid. (Big Issue)

THE ONE WITH THE WORST SUMMER EVER

Greg Heffley's family are going to have to count their pennies this summer.

That means, no beach holiday and lots of 'family togetherness'. Which doesn't sound like a whole lot of fun.

The only good thing Greg has to look forward to is his birthday, but even THAT ends in a disaster.

And when his dad brings home a brand-new addition to the family, Greg is outnumbered. It could be a real dog of a summer . . .

*Don't miss Diary of an Awesome Friendly Kid≠≠, to read Greg's best friend Rowley's side of the story!*

Descripciůn Paperback. Condiciůn: new. Paperback. come with being everyone's favourite wimpy kid! Greg's mom has a vision of 'family togetherness' that really doesn't sound a whole lot of fun. But there's a brand-new addition to the Heffley family to contend with and it looks like Greg might be outnumbered. It could be a real dog of a summer .The most exciting publishing phenomenon continues! Now in paperback - the next mega-selling instalment in the hilarious Diary of a Wimpy Kid series. Shipping may be from multiple locations in the US or from the UK, depending on stock availability. Nļ de ref. del artŪculo: 9780141331973