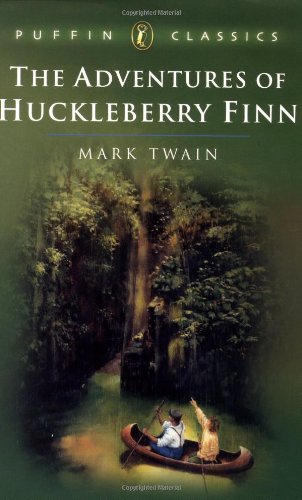 Hilariously picaresque, epic in scope, alive with the poetry and vigor of the American people, Mark Twain's story about a young boy and his journey down the Mississippi was the first great novel to speak in a truly American voice. Influencing subsequent generations of writers -- from Sherwood Anderson to Twain's fellow Missourian, T.S. Eliot, from Ernest Hemingway and William Faulkner to J.D. Salinger -- "Huckleberry Finn," like the river which flows through its pages, is one of the great sources which nourished and still nourishes the literature of America.

Born Samuel Langhorne Clemens in 1835, Mark Twain spent his youth in Hannibal, Missouri, which forms the setting for his two greatest works, The Adventures of Tom Sawyer and The Adventures of Huckleberry Finn. Trying his hand at printing, typesetting and then gold-mining, the former steam-boat pilot eventually found his calling in journalism and travel writing. Dubbed 'the father of American literature' by William Faulkner, Twain died in 1910 after a colourful life of travelling, bankruptcy and great literary success.

2. The Adventures Of Huckleberry Finn :