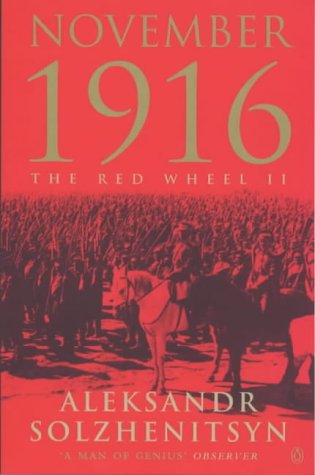 This is the second volume in the monumental historical epic, THE RED WHEEL, and follows AUGUST 1914. Each volume concentrates on a crucial turning point in the march towards revolution. The month of November 1916 was outwardly unmarked by seismic events and encapsulated the stagnant and oppressive atmosphere of the months preceding the Revolution. Beneath the surface, however, Russian society - from the Tzar's court to ill-led soldiers in the trenches - seethed fiercely. Solzhenistyn makes us experience the whole bubbling cauldron. With masterly and moving empathy, through the eyes of both historical and fictional protagonists, the author unforgettable transports us to that time and place - the last of pre-Soviet Russia.

Aleksandr Solzhenitsyn, winner of the 1970 Nobel Prize in Literature, was born in 1918. His many well-known novels include ONE DAY IN THE LIFE OF IVAN DENISOVICH and THE GULAG ARCHIPELAGO. He lives in Moscow.