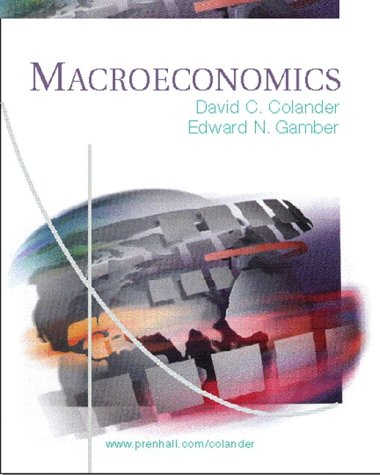 THE PERFECT MIX OF POLICY AND THEORY"I'm really becoming convinced of the advantages of this book. I think it's more that the policy orientation credits the theory, than that the authors sweep theory aside"... "I am even more dissatisfied with my current book for knowing this one is coming." -- Steven Dickey, Eastern Kentucky University"There is a good mix of theory, examples, and policy. Based on what I have seen so far, I would rate the text superior to all other texts on this criterion." -- Douglas Woolley, Radford UniversityEXPANDED AND UNDERSTANDABLE DISCUSSION OF GROWTH THEORY"Wow, what a great chapter Chapter 6! The explanations are clear. It made me wish I could use this chapter in lieu of the gobbledygook found in other texts when they try to go beyond the Solow model ...I think the discussion of patents alone is more clear here than anywhere else." -- Martha L. Olney, U. C. Berkeley"I liked Chapter 6 very much. It covers the contributions made by the New Growth Theory in a simple and understandable manner, and offers a sound policy perspective for economic growth." -- Faik Koray, Louisiana State UniversityTHE STUDENT FOCUS"The uniqueness of the text should make it very successful in the current marketplace, especially with students who have looked at parts of macro theory and wondered, 'Why do we need to know this? '" -- Doris Bennett, Jacksonville State University"It is the kind of book that could get students interested and excited about macroeconomics." -- Willem Thorbecke, George Mason University

The authors recognize that the economy is a complex system and that economists do not have all the answers; basic economic models do not hold true under all circumstances. The text provides students with a framework for discussing complicated questions and the tools to think about models and the economy in the way that macroeconomists and policy makers do. Theory is developed as needed to understand policy, rather than presenting theory first and then adding policy, and is presented with a minimum of technical detail. The authors present modern macroeconomic concepts and issues in a lively, accessible and entertaining style.