Artículos relacionados a Essential Mathematics for Games and Interactive Applications... 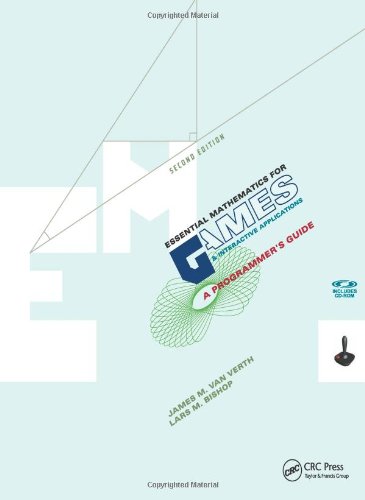 "It's the book with all the math you need for games." -Neil Kirby, Researcher, Alcatel-Lucent

Essential Mathematics for Games and Interactive Applications, 2nd edition presents the core mathematics necessary for sophisticated 3D graphics and interactive physical simulations. The book begins with linear algebra and matrix multiplication and expands on this foundation to cover such topics as color and lighting, interpolation, animation and basic game physics. Essential Mathematics focuses on the issues of 3D game development important to programmers and includes optimization guidance throughout.

The new edition Windows code will now use Visual Studio.NET. There will also be DirectX support provided, along with OpenGL - due to its cross-platform nature. Programmers will find more concrete examples included in this edition, as well as additional information on tuning, optimization and robustness.

The book has a companion CD-ROM with exercises and a test bank for the academic secondary market, and for main market: code examples built around a shared code base, including a math library covering all the topics presented in the book, a core vector/matrix math engine, and libraries to support basic 3D rendering and interaction.