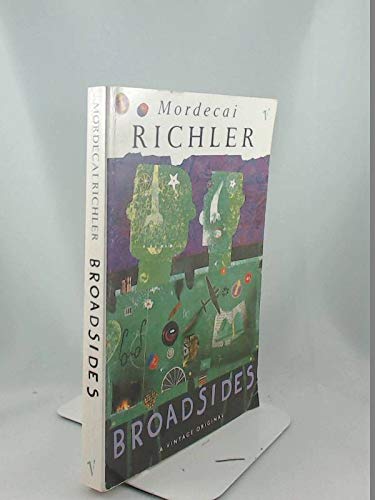 From the author of Solomon Gursky Was Here, shortlisted for the 1990 Booker Prize and winner of the Commonwealth Writers Prize 1990, comes a broadside of outrageous remarks, irreverent wisdom and wickedly accurate criticism. Whether surveying the international literary scene or considering the excesses of pop psychology, Mordecai Richler attacks his diverse subjects with relish and devatsating wit. Broadsides brings together Richler's best essays, reviews and articles, written over the last thirty years for such publications as Esquire, Playboy, Gentleman's Quarterly and the New York Times Book Review.

Mordecai Richler's novels inlcude St Urbain's Horseman, shortlisted for the Booker Prize, The Apprenticesip of Duddy Kravitz, Cocksure and Joshua Then and Now. He is also the author of the children's books Jacob Two-Two Meets the Hooded Fang and Jacob Two-Two and the Dinosaur, as well as two essay collections, Hunting Tigers Under Glass and Home Sweet Home. He lived in London for twenty years, where he wrote for the New Statesman, Encounter, London Magazine and sveeral national newspapers. In 1972 he returned to Canada with his wife and five chidlren, and now lives in Montreal, where he was born. Solomon Gursky was Here, his most recent novel, was shortlisted for the Booker Prize in 1990 and won the Commmonwealth Writers Prize in 1990.

Descripción Vintage, 1991. Paperback. Condición: Good. Good to Very Good condition. This book is in stock now, in our UK premises. Photos of most of our books are available - please ask, as dustjacket and cover illustrations vary, and unless the accompanying image is marked 'Bookseller Image', it is an Abebooks Stock Image, NOT our own. Overseas buyers also note that shipping rates apply to packets of 750g and under, and should the packed weight of an item exceed this we reserve the right to ship via 'Economy', or request extra postage prior to fulfilling the order, or cancel. Nş de ref. del artículo: mon0000084765