Artículos relacionados a Bloodlands: Europe between Hitler and Stalin

Bloodlands: Europe between Hitler and Stalin 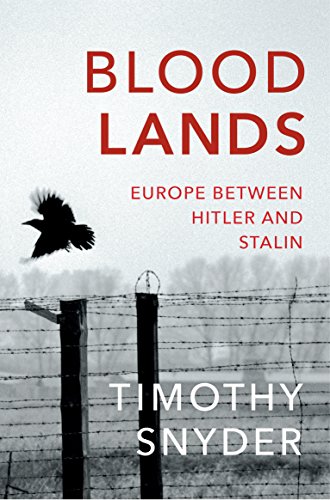 Under Hitler and Stalin the Nazi and Soviet regimes murdered fourteen million people in the bloodlands between Berlin and Moscow. The killing fields extended from central Polads to western Russia. For twelve savage years, on this bloodsoaked soil an average of one million individuals - mostly women, children and the aged - were murdered every year., Though in 1939 these lands became battlefields, not one of these fourteen million was killed in combat. They were victims of a murderous policy, not casualties of war. Int his deeply unsettling and revelatory book, Timothy Snyder gives voice to the testimony of the victims through the letters home, the notes flung from trains, the diaries on corpses., It is a brilliantly researched, profoundly humane and authoritative bok that demands we pay attention to those that history is in danger of forgetting.

"A hugely important historian of this nightmarish era. Nobody has explained it this way before" (William Leith Evening Standard)

‘When Timothy Snyder’s book Bloodlands: Europe Between Hitler and Stalin was published in 2010, it quickly established its author as one of the leading historians of his generation, a scholar who combined formidable linguistic skills ― he reads or speaks 11 languages ― with an elegant literary style, white-hot moral passion and a willingness to start arguments about some of the most fraught questions of the recent past.’ New York Times

Timothy Snyder is Levin Professor of History at Yale University, and has written and edited a number of critically acclaimed and prize-winning books about twentieth-century European history: Bloodlands won the Hannah Arendt Prize, the Leipzig Book Prize for European Understanding, the Ralph Waldo Emerson Award in the Humanities and the literature award of the American Academy of Arts and Letters. Black Earth was longlisted for the Samuel Johnson Prize.

Snyder is a frequent contributor to the New York Review of Books and the Times Literary Supplement. He is a member of the Committee on Conscience of the United States Holocaust Memorial Museum, a permanent fellow of the Institute for Human Sciences, and sits on the advisory council of the Yivo Institute for Jewish Research.