ArtŪculos relacionados a Fourteen Ninety Two: The Year and The Era (The Travellers...

Litvinoff, Barnet Fourteen Ninety Two: The Year and The Era (The Travellers' Comp)

Fourteen Ninety Two: The Year and The Era (The Travellers' Comp) 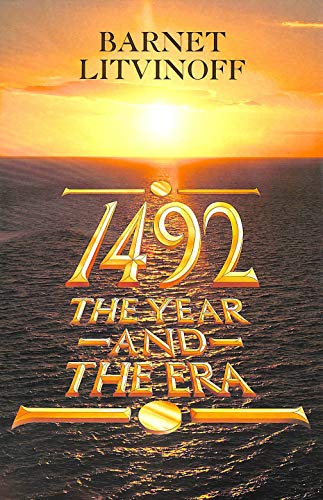 Barnet Litvinoff argues that the most significant year of the last ten centuries falls halfway through the millenium. In 1492 Europe, newly revitalized as the Renaissance swept northward from Italy, was never before a centre of intellectual excellence, of geographical exploration or of trade. But it took the voyage of Christopher Columbus to fully establish the destiny of this Western promontory of the Eurasian landmass. Only with his discovery of America were the ancient countries which made up Europe to assume a global role. This narrative history describes a landscape both savage and sublime. Across a whole continent we see the greatest elements of life played out, often in contradiction; war dominates the scene, but against this an irrepressible creative force urges the humanist impulse forward to new horizons in literature and art. The clash of personal ambition is typified by the confrontation of the Medici and the Borgias in strife-torn Italy - which at the same time nurtured Leonardo da Vinci and Michelangelo. The story includes the accidents of royal birth and death through which the Hapsburgs became the first Christian dynasty to bestride the globe. At the same time the church Universal was at its most decadent, ripe for Reformation. This was the background to Columbus' voyage, which was to give Europe new transoceanic dimension. The immediate practical consequences are explored; the factors which combined to enable Europe to resist Islamic conquest and remain Christian; the new trading possibilities which were to give birth to the European Empires. The author has also written "The Burning Bush" and "Antisemitism and World History".

1. Fourteen ninety-two : the year and the era Litvinoff, Barnet