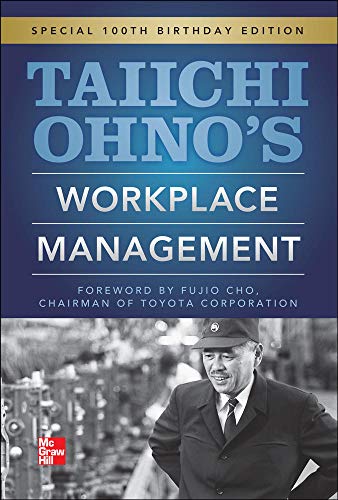 Publisher's Note: Products purchased from Third Party sellers are not guaranteed by the publisher for quality, authenticity, or access to any online entitlements included with the product.

Businesses worldwide are successfully implementing the Toyota Production System to speed up processes, reduce waste, improve quality, and cut costs. While there iswidespread adoption of TPS, there is still much to be learned about its fundamental principles.

This unique volume delivers a clear, concise overview of the Toyota Production System and kaizen in the verywords of the architect of both of these movements, Taiicho Ohno, published to mark what would have been his 100thbirthday. Filled with insightful new commentary from global quality visionaries, Taiichi Ohno’s Workplace Management is a classic that shows how Toyota managerswere taught to think.

Based on a series of interviews with Ohno himself, this timeless work is a tribute to his genius and to the corevalues that have made, and continue to make, Toyota one of the most successful manufacturers in the world.

"Whatever name you may give our system, there are parts of it that are so far removed from generally acceptedideas (common sense) that if you do it only half way, it can actually make things worse."

"If you are going to do TPS you must do it all the way. You also need to change the way you think. You need to change how you look at things." -- Taiichi Ohno

"This book brings to us Taiichi Ohno's philosophy of workplace management--the thinking behind the Toyota Production System. I personally get a thrill down my spine to read these thoughts in Ohno’s own words." -- Dr. Jeffrey Liker, Director, Japan Technology Management Program, University of Michigan, and Author, The Toyota Way

Based on a series of interviews with Taiicho Ohno, this unique volume delivers a clear, concise overview of the Toyota Production System and kaizen in the very words of the architect of both of these movements, published to mark what would have been his 100th birthday.

Taiichi Ohno was born in Dalian, China, on February 29, 1912. He joined Toyoda Boshoku in 1932 after graduating from the mechanical engineering department of Nagoya Technical High School. Mr. Ohno was transferred toToyota Motor Company in 1943 and was named the machine shop manager in 1949. He was promoted at Toyota to director in 1954, managing director in 1964, senior managing director in 1970, and executive vice president in 1975. He retired from Toyota in 1978. Mr. Ohno is the father of the Toyota Production System. He authored three works: Toyota Production System: Beyond Large-Scale Production, Taiichi Ohno's Workplace Management, and Just-in-Time for Today and Tomorrow with Setsuo Mito.

Descripción Hardcover. Condición: New. Special 100th birthday edition. Hardcover. COMMEMORATING THE 100th BIRTHDAY OF TAIICHI OHNOBusinesses worldwide are successfully implementing the Toyota Production System to speed up processes, reduce waste, improve quality, and cu.Shipping may be from multiple locations in the US or from the UK, depending on stock availability. 208 pages. 0.460. Nş de ref. del artículo: 9780071808019