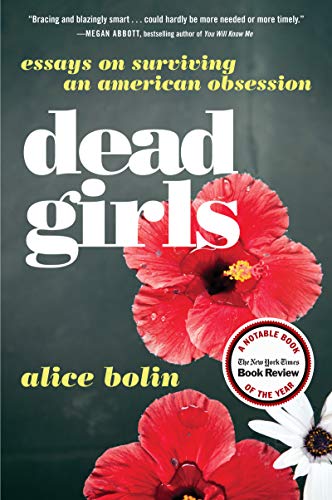 "Everything I want in an essay collection: provocative lines of inquiry, macabre humor, blistering intelligence. I love this book. I want to take it into the middle of a crowded room and hold it up and scream until someone tackles me the ground; even then, I'd probably keep screaming."--Carmen Maria Machado, author of Her Body and Other Parties

"Bracing and blazingly smart, Alice Bolin's Dead Girls could hardly be more needed or more timely. A critical contribution to the cultural discussion of gender and genre, Los Angeles and noir, the unbearable persistence of the male gaze and the furtive potency of female rage."--Megan Abbott, Edgar Award-winning author of You Will Know Me

"I loved this book with reckless abandon. Alice Bolin tracks our societal fixation with violence against young women through an astonishing variety of cultural landscapes... An irresistible read. It's wise and wonderful and I plan to press it on everyone I know."--Robin Wasserman, author of Girls on Fire

"[An] engrossing debut collection of essays... The author's voice is eerily enthralling, systematically on point, and quite funny... An illuminating study on the role women play in the media and in their own lives."--Kirkus Reviews (starred review)

"In her searing new essay collection, Bolin probes the generations-old obsession with young, tragic heroines... Smart, thorough, and urgent, Bolin's essays are a force to be reckoned with."--Booklist

"I loved reading Dead Girls... Alice Bolin's potent voice and nimble intertwining of the personal and the cultural form an incantation strong enough for a resurrection."--Elissa Washuta, author of Starvation Mode

"A smart, incisive book about true crime and crime fiction tropes, loneliness, Los Angeles, and literature. I will be thinking about this collection for a long while."--Sarah Weinman, News Editor for Publishers Marketplace and author of The Real Lolita

"My copy of Alice Bolin's Dead Girls is a thick flutter of dogeared pages and underlined sentences. It made me think about what I've read, and what I've written, and what I've experienced, in a fresh and challenging way."--Emily Winslow, author of Jane Doe January

"A vivid and compelling collection challenging how we read and watch young women, alive and otherwise.... A compulsively readable and thoroughly enjoyable book, offering honesty and insight about the threats women face and perpetuate as we come of age."--Rachel McCarthy James, author of The Man on the Train

"In effusive and incisive prose, Bolin examines our culture and finds beauty and truth in the tangled mess of it all. Both playful and thoughtful, urgent and timeless, this book is a is a riveting read that both journeys through our cultural consciousness and reckons with it."--Lyz Lenz, Managing Editor of The Rumpus

Best of 2018 according to Kirkus, The Boston Globe, The New York Times, The Portland Mercury, Bustle, Thrillist, and Electric Lit

In this poignant collection, Alice Bolin examines iconic American works from the essays of Joan Didion and James Baldwin to Twin Peaks, Britney Spears, and Serial, illuminating the widespread obsession with women who are abused, killed, and disenfranchised, and whose bodies (dead and alive) are used as props to bolster men’s stories. Smart and accessible, thoughtful and heartfelt, Bolin investigates the implications of our cultural fixations, and her own role as a consumer and creator.

Bolin chronicles her life in Los Angeles, dissects the Noir, revisits her own coming of age, and analyzes stories of witches and werewolves, both appreciating and challenging the narratives we construct and absorb every day. Dead Girls begins by exploring the trope of dead women in fiction, and ends by interrogating the more complex dilemma of living women – both the persistent injustices they suffer and the oppression that white women help perpetrate.

Reminiscent of the piercing insight of Rebecca Solnit and the critical skill of Hilton Als, Bolin constructs a sharp, perceptive, and revelatory dialogue on the portrayal of women in media and their roles in our culture.