Artículos relacionados a Hollywood Sketchbook: A Century of Costume Illustration 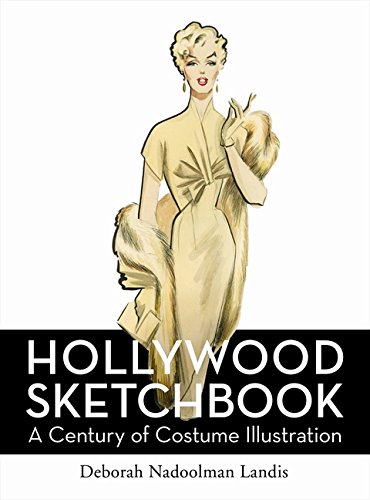 In "Hollywood Sketchbook: A Century of Costume Illustration", author and Academy Award-nominated costume design expert Deborah Nadoolman Landis opens the doors to the dynamic world of costume illustration, revealing the world's most sumptuous illustrations, behind-the-scenes stories of the most beloved costumes of all time, and the deft hands, sweeping visions, and creative intuitions that brought them to life. In this follow-up volume to "Dressed: A Century of Hollywood Costume Design", Landis showcases the work of one hundred of the most accomplished, provocative, and pioneering costume design artists of the last century of Hollywood. Drawing on years of extensive research, Landis has discovered a wealth of never-before-seen, original sketches and full-colour illustrations from some of the biggest names in the biz - such as Adrian, Pauline Annon, and Cecil Beaton - to the lesser-known but equally important pioneers - Bonnie Cashin, Joe De Yong, Charles LeMaire. With a deluxe, oversized, luxuriously produced package, this book is singular in its form as well as its content, making it a stand-out on the shelf and the perfect gift book for anyone interested in film, fashion, and costume design history. The book paints vivid biographical sketches of each artist along with galleries of images that best highlight their work over the ages and a dazzling array of first-person anecdotes that further inform and enhance every illustration. Deborah Landis is the curator of London's the Victoria &Albert Museum's fall 2012 exhibition 'Hollywood Costume', which explores the central role costume design plays in cinema storytelling. It will bring together more than 100 of the most iconic movie costumes from across a century of film-making revisiting unforgettable and beloved characters like, Indiana Jones, Scarlett O'Hara, Jack Sparrow, Holly Golightly and Darth Vader.

Hollywood Sketchbook is the first volume published on costume design illustration for the movies. This groundbreaking book celebrates one hundred years of the costume designers' and costume illustrators' contributions to the art of cinematic storytelling. Costume designer Deborah Nadoolman Landis offers us a unique perspective on the art and importance of the costume drawing. During her years of practice and research, Professor Landis has discovered a wealth of never-before-seen original sketches, published here for the first time, along with a comprehensive array of first-person anecdotes from collectors, archivists, illustrators, and designers. Whether the film, costume designer, or star was significant or successful did not factor into the criteria for choosing the sketches in this book. Every drawing had a chance to be included on its own merit as a work of art. Featuring a comprehensive introduction that contextualizes the rigors of costume design and a filmography that details the career highlights of each artist, Hollywood Sketchbook is the perfect gift for any lover of fine art, costume design, and the movies.