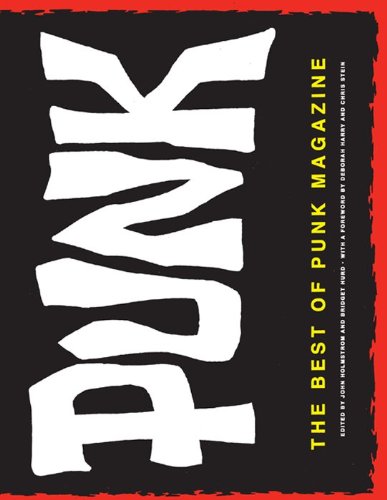 "This coffee-table book cherry-picks from the archive: a Patti Smith Q&A, a carton strip (with real photos) starring Lester Bangs, and a two-page centerfold of Debbie Harry, who's billed as 'Punk Playmate of the Month.'" -- Rolling Stone, 4 Star Review The anthology is packed tighter than CBGB in the 70s on a Saturday night, with incredible interviews...art, comics, rants, killer photos, and behind-the-scenes commentary and backstory on each issue from Holmstrom. It's not just the history of the magazine...it conjures up the spirit of an era. -- Vanity Fair "If you're a punk fan, I'd say this hardcover is pretty essential to your collection." -- USA Today's Pop Candy "While the thought of a hardcover, slick-papered, coffee-table book anthologizing the decidedly low-rent, ragtag Punk magazine might seem the antithesis of punk, even a curmudgeon like Johnny Rotten would have to spit a gob in appreciation of the nicely done result." -- Houston Press "The Best of Punk is a funny, visually-stimulating time capsule commemorating the first music periodical of its kind: A subversive, savvy, often-imitated street-intellectual art showcase for punk rock purveyors at the dawn of the Eighties." -- Examiner.com "Though it only existed from 1976-1980, Punk Magazine captured the zeitgeist of New York's punk music scene as it emerged from a few ramshackle clubs (most notably CBGB's and Max's Kansas City) to the national and international stage." -- Publishers Weekly (starred review)

Fans of "Please Kill Me", rejoice: Here is the raucous, star-studded, anarchic best of the era-defining "Punk" magazine, lovingly collected and reproduced in facsimile form - including one completely unseen "lost issue" - with behind-the-scenes stories from founding editor John Holmstrom.

1. The Best of Punk Magazine

2. The Best of Punk Magazine (Hardback)

3. The Best of Punk Magazine (Hardback)

4. The Best of Punk Magazine

5. Punk : The Best of Punk Magazine

6. The Best of Punk Magazine

7. Punk: The Best of Punk Magazine