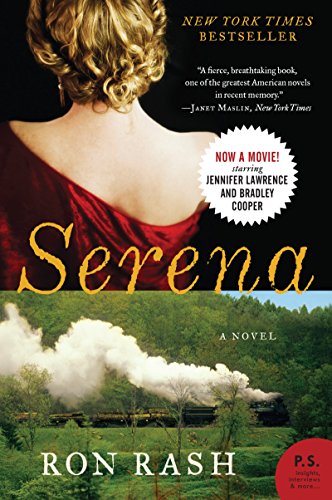 "From that arresting opening.the violence escalates along with the tension in this absorbing story about rapacious greed in Depression-era Appalachia.Thrilling stuff." -- People

"The opening is unforgettable.the last hundred pages are thrilling.should be a breakthrough for this masterful storyteller." -- Kirkus Reviews (starred review)

"This is a must-read novel." -- About.com (Contemporary Literature)

"From that arresting opening...the violence escalates along with the tension in this absorbing story about rapacious greed in Depression-era Appalachia...Thrilling stuff."--People

"Ron Rash's SERENA will stand as one of the major American novels of this century. It is a flat-out masterpiece-mythic, terrifying, and beautiful."--Lee Smith

"Too hypnotic to break away from...And the final chapter is as flawless and captivating as anything I've read this year, a perfectly creepy shock that will leave you hearing nothing but the wind between the stumps."--Washington Post Book World

Traveling to the mountains of 1929 North Carolina to forge a timber business with her new husband, Serena Pemberton champions her mastery of harsh natural and working conditions but turns murderous when she learns she cannot bear children, in a best-selling novel that was a PEN/Faulkner Award finalist. Reprint. 100,000 first printing.