ArtĒculos relacionados a A Short History of Reconstruction

A Short History of Reconstruction 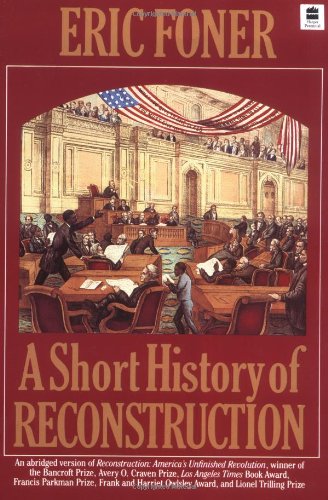 "This is history written on a grand scale, a masterful treatment of one of the most complex periods of American history." -- David Herbert Donald, "The New Republic""Eric Foner has put together this terrible story with greater cogency and power, I believe, than has been brought to the subject heretofore. He avoids ideological skids, freeloading hindsight, and mirages of certitude . . . Foner's book brings to distinguished fruition one great cycle of Reconstruction historiography." -- C. Vann Woodward, "New York Review of Books""A heroic synthesis that should dominate the field--much like C. Vann Woodward's interpretation of the new South . . . It gives nearly equal time to all the protagonists in the Reconstruction drama and recognizes how inextricably economic, political, social and ideological issues are bound." -- Thomas C. Holt, "Washington Post Book World""A remarkable clarity is one of the many beauties of this book that dwells on so many conflicts and ambiguities . . . Foner's "Reconstruction" is a smart book of enormous strengths." -- Neil Irvin Painter, "Boston Globe""Foner's book traces in rich detail the bitter course of the history of the South's failure to adjust to the revolution that brought the Civil War. Only by tracing that history and understanding can the region disenthrall itself even today. No book could be more timely."-- William Kovach, "Atlanta Constitution"

1. A Short History of Reconstruction

3. A Short History of Reconstruction