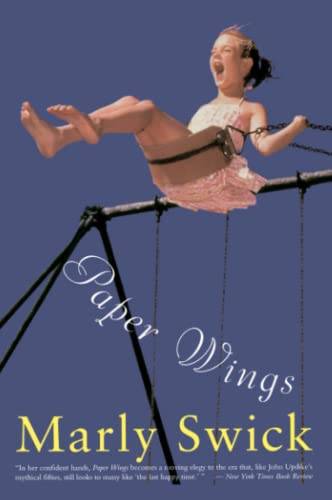 "The novelist's hypnotic rendering of one family and its response to a particularly important moment in recent American history contains scene after scene in which the terror lurking behind all middle-class existence seems constantly about to break through the surface of things...Marly Swick links all this together into an impressive first novel about love and education into the perils of family life."-- National Public Radio

"Swick is a master of the small but significant detail, her prose as delicate as gossamer wings, her observations as finely tuned as a professional eye examination...In an age in which coming-of-age novels seem to be crawling out of the woodwork, "Paper Wings, in acknowledging how imperfect and random life can be, is a standout."-- "Cleveland Plain Dealer

""Paper Wings evokes a sweet, uniquely American nostalgia as it follows Suzanne through the years, dissecting a family's--and a country's--innocence lost."-- "Entertainment Weekly, "A"

"Elicits the kind of pit-of-the-stomach feeling specially reserved for times of family disintegration, and, while there is no grand tragedy, the loss of those elusive islands of serenity is keenly felt."-- "The New Yorker

In a story set against the backdrop of the Kennedy presidency, Suzanne, a twelve-year-old girl, recounts the dissolution and ultimate redemption of her family, her mother's struggle with bouts of severe depression, and her relationship with her mother