Artículos relacionados a The Selection Series 1-5 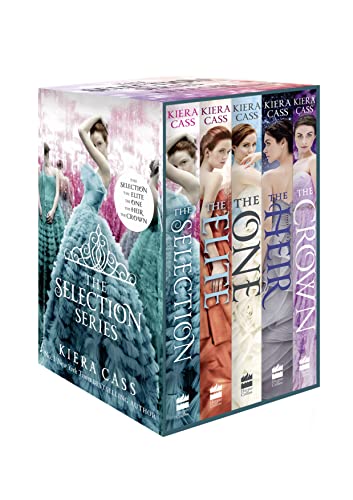 THE SELECTION is the epic no. 1 New York Times bestselling series. Now available in a five-book boxed set.

THE SELECTION is the chance of a lifetime and 17-year-old America Singer should feel lucky. She has been chosen for the reality TV lottery in which the special few compete for gorgeous Prince Maxon’s love.

Swept up in a world of elaborate gowns, glittering jewels and decadent feasts, America is living a new and glamorous life. And the prince takes a special interest in her, much to the outrage of the others.

Rivalry within The Selection is fierce and not all of the girls are prepared to play by the rules. But what they don’t know is that America has a secret – one which could throw the whole competition... and change her life forever.

The story continues in THE HEIR and THE CROWN as America’s daughter undertakes her own Selection – who will she choose? Is she destined for true love?

Prepare to swoon with all five books in THE SELECTION series!