Artículos relacionados a The Bear Who Went Boo!

The Bear Who Went Boo! 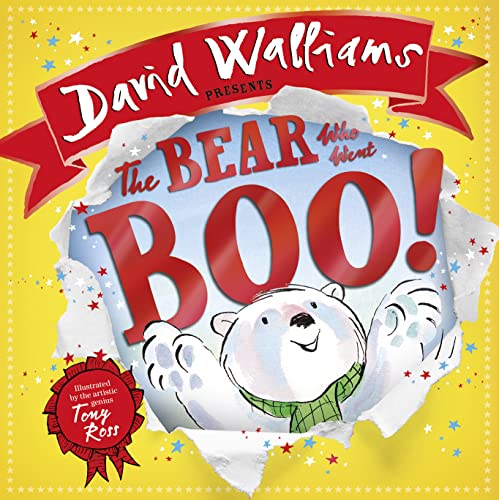 From Number One bestselling picture book duo, David Walliams and Tony Ross, comes this bear-illiantly funny adventure for children of 3 and up. At the top of the world, surrounded by snow and ice, lives a very cheeky polar bear cub who loves to go... BOO! But this little bear cub doesn't always know when to stop..., Presenting a mischievous new picture book packed with snow and surprises, from two standout talents!

PRAISE FOR FIRST HIPPO ON THE MOON:

"Another triumph for David Walliams. His books are a breath of wonderful fresh air" – The Sun

David Walliams has revolutionised reading for children and become one of the most influential children’s writers today. Since the publication of his ground-breaking first novel, The Boy in the Dress (2008), Walliams has seen unprecedented growth with global sales exceeding 32 million copies, and his books translated into 53 languages.

Born in London, Tony Ross went to art school in Liverpool. His cartoons have appeared in famous publications the world over. His first book, Hugo and the Wicked Winter, was published in 1972. Tony has since written over 100 books and illustrated over 2000! His creations Towser and The Little Princess have been turned into TV series.

David and Tony have worked on six bestselling picture books together, and nine of David’s phenomenally successful children’s novels. David and Tony also collaborated on the 2017 World Book Day title, BLOB, and on the blockbuster collections, The World’s Worst Children 1, 2 and 3.

1. The Bear Who Went Boo! (Paperback)

3. The Bear Who Went Boo! (Paperback)

Descripción 2017. Paperback. Condición: New. Paperback. From Number One bestselling picture book duo, David Walliams and Tony Ross, comes this bear-illiantly funny adventure for children of 3 and up. At the top of the world, surrounded by snow.Shipping may be from multiple locations in the US or from the UK, depending on stock availability. 32 pages. 0.236. Nş de ref. del artículo: 9780008174897