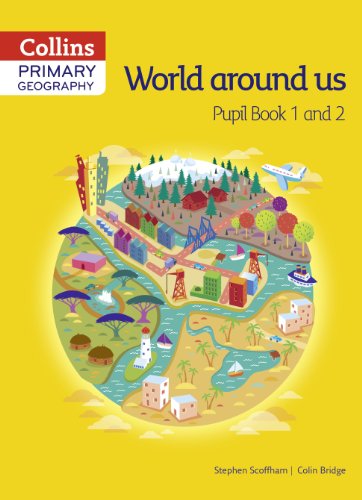 Collins Primary Geography has been developed to provide full coverage of the national curriculum requirements for geography in the primary school.

The Key stage 1 primary geography book delivers a progressive, skills based scheme for the early primary years. Subject specific vocabulary is introduced along with geographical skills to increase locational awareness.

It covers map skills, physical, human and environmental geography, introduces contrasting localities in the UK, Europe, Asia and the wider world and uses an extensive range of evidence to stimulate the pupil’s interest and encourage investigative skills. Photographs, maps, satellite images artwork, charts and diagrams are use throughout.

The pupil book has an accompanying teacher’s guide which contains copymasters.

Dr Stephen Scoffham is a Visiting Reader in Sustainability and Education at Canterbury Christ Church University. He is the author of many texts for children and teachers on primary geography and has won awards from the Geographical Association for his publications for the past two years running (2014 and 2015). Academically, Stephen has a leadership role developing sustainability and environmental perspectives in university life. His professional interests also include intercultural understanding, the global dimension, creativity and learning. Stephen has been an elected member of the Geographical Association’s governing body since 2011 and has recently been appointed as a trustee of Commonwork, a Kent-based charity which explores sustainable living and working.

Descripci¾n Paperback. Condici¾n: New. Paperback. Collins Primary Geography has been developed to provide full coverage of the national curriculum requirements for geography in the primary school. The Key stage 1 primary geography book d.Shipping may be from multiple locations in the US or from the UK, depending on stock availability. 64 pages. 0.270. N║ de ref. del artĒculo: 9780007563586

7. Primary Geography. Pupil Book 1 and 2 World Around Us