The Fontana History of Germany 1780–1918: The Long Nineteenth Century 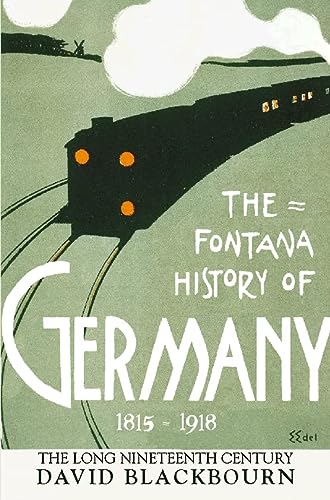 In 1815, 90 per cent of the German population were involved in agriculture and craft production, were stubbornly loyal to their village, home town or city and lived in what was then a massively decentralized state. By 1871, Bismarck and the Prussian army had united the country, transforming Germany from a "land of poets and thinkers" to one which arguably outdid Britain in its enthusiasm for the new media of the railway and the telegraph. Yet by 1914, German politics had become febrile and unstable. Mixing social, political and economic history, David Blackbourn analyzes the degree of German responsibility for the outbreak of World War I and traces the further dramatic changes in peoples' incomes and status, as the social, economic and cultural tensions that had been submerged in the previous decades suddenly came to a head.

In the late eighteenth century, German-speaking Europe was a patchwork of lordships and principalities, hundreds in all. Most people lived in the countryside, just half survived until their late twenties, and women were still occasionally burnt as witches. By the beginning of our own century, a unified Germany was the most powerful state in Europe. No longer a quaintly provincial 'land of poets and thinkers', but an industrial and military giant with an advanced welfare system, Germany prompted mingled admiration and alarm among its contemporaries.

David Blackbourn tells the story of this transformation with eloquence and authority. He is concerned with changes at three interlinked levels – the political, social and cultural. The book explains how Germany came to be unified, and the consequences of that unification. It describes the growing role played by the state and the new ways in which rulers asserted their authority, but questions clichés about German 'obedience' and shows how the nineteenth century produced a vigorous popular politics on both the left and the right.

This is a book about the ways in which the factory, the railway and movement into the towns created new social relations and altered perceptions of time and space. But it also reminds us not to forget rural and small-town provincial Germany, or to neglect the casualties of modernisation. Drawing on a generation of work devoted to migration, housing, diet, crime and medicine, Blackbourn offers a rich and readable account of a changing society. This is the history that tries to do justice to the experience of contemporary Germans, women as well as men, and it deals with a dazzling range of themes, from religion to racism, Mozart to popular culture.

David Blackbourn's powerful and original book on Germany from the era of the French Revolution to the end of the first World War is the work of an outstanding historian, and essential for anyone interested in modern German history.