Dragons on the Sea of Night (Sunset warrior cycle) 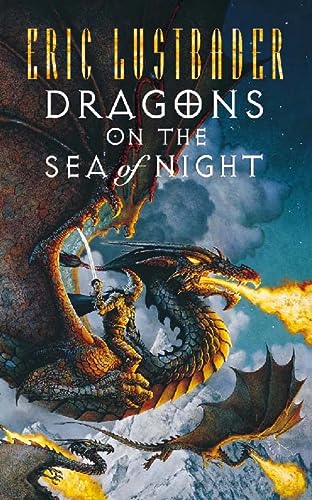 He is Ronin no more.

He is the Dai-San, the Sunset Warrior: glorious and terrible to behold. Neither man nor god, yet the power he wields is beyond description. With it, he slayed the Dolman, the dark angel of Chaos.

But the Dai-San is not invincible. He still has bitter lessons to learn. Along the darkest road of his struggles, the Dai-San was aided by his beloved bond-brother Moichi; and in his moments of relief he earned the love of Chiisai. They are his greatest allies, for they are unswerving in their loyalty: they are his greatest weakness, for each has seen inside his soul and knows how he can be defeated.

Now, in a world where nothing is as it seems and dangerous ambitions are brutally realized, Chaos finds an agent through which it can return and once again challenge its deadliest enemy, the Dai-San. And whatever the prize, Chaos will have its revenge...

In addition to writing numerous bestselling novels, Lustbader spent fifteen years in the music industry. He travels worldwide researching his novels, and lives in New York with his wife Victoria.

1. Dragons on the Sea of Night

2. Dragons on the Sea of Night

3. Dragons on the Sea of Night