Artículos relacionados a The Martians 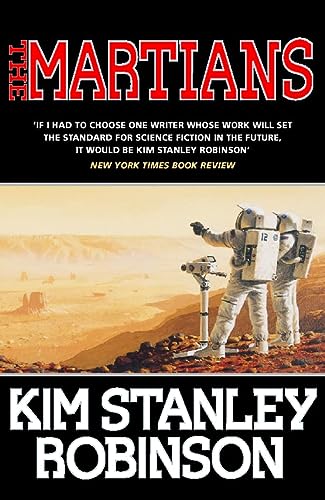 ‘One of the finest working novelists in any genre’
GUARDIAN

'If I had to choose one writer whose work will set the standard for science fiction in the future, it would be Kim Stanley Robinson’
NEW YORK TIMES

Praise for The Mars Trilogy:

‘One of the finest works of American SF’
TIMES LITERARY SUPPLEMENT

‘A staggering book. The best novel on the colonization of Mars that has ever been written’
Arthur C. Clarke

The Mars trilogy has rapidly assumed the status of modern science fiction classic, capturing the imagination of hundreds of thousands of readers around the world. Now, with The Martians, comes Kim Stanley Robinson essential companion to the Mars series. New novellas and short stories head the collection, featuring many of the trilogy’s central characters in events previously only hinted at in the novels. Added to this are works on Martian mythology, poetry, character histories, alternative scenarios to the events that actually took place in the trilogy and finally various pieces which the author omitted in the final edit.

In short, The Martians is a unique collection of previously unpublished fiction, a fascinating
addition to Robinson’s oeuvre, and a must for all lovers of the red planet.