Artículos relacionados a The Fugu Plan: The Untold Story of the Japanese and...

Portada Tokayer, Marvin, and Swartz, Mary The Fugu Plan: The Untold Story of the Japanese and the Jews ...
Imagen del editor 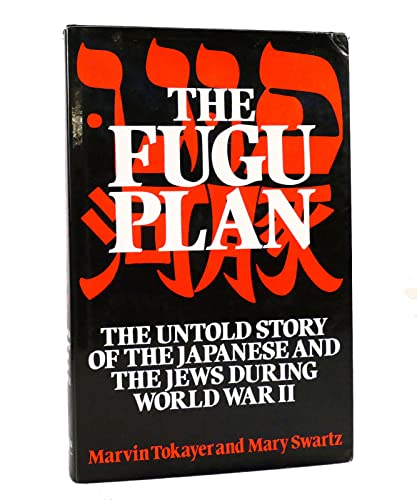 The Fugu Plan: The Untold Story of the Japanese and the Jews During World War II

287 pages. illus., chronology, glossary, index. DJ has some wear and small chips/edge tears. After his ordination as a rabbi, Marvin Tokayer served as United States Air Force Chaplain in Japan. Upon discharge he returned to Tokyo to serve for eight years as the rabbi for the Jewish Community of Japan. He wrote 20 books in Japanese, discovered literally the last of the Chinese Jews; located a long-lost Jewish cemetery in Nagasaki; contributed to the Encyclopedia Judaica; acted as a bridge for many travelers between East and West; served the needs of his congregation. His investigations took him throughout Asia, to Israel and Washington D.C. as he searched for documents and tracked down the people who had taken part in the rescue of Jews from the Holocaust. In 1979 Rabbi Marvin Tokayer and Mary Swartz authored a book called The Fugu Plan. They claim that the plan, which was viewed by its proponents as risky but potentially rewarding for Japan, was named after the Japanese word for puffer-fish, a delicacy which can be fatally poisonous if incorrectly prepared. Tokayer and Swartz base their claims on statements made by Captain Koreshige Inuzuka and allege that such a plan was first discussed in 1934 and then solidified in 1938, supported by notables such as Inuzuka, Ishiguro Shiro and Norihiro Yasue. Shortly prior to and during World War II, and coinciding with the Second Sino-Japanese War, tens of thousands of Jewish refugees were resettled in the Japanese Empire. The onset of the European war by Nazi Germany involved the lethal mass persecutions and genocide of Jews, later known as the Holocaust, resulting in thousands of Jewish refugees fleeing east. Many ended up in Japanese-occupied China. Originally the idea of a small group of Japanese government and military officials who saw a need for a population to be established in Manchukuo (otherwise known as Manchuria) and help build Japan's industry and infrastructure there, the primary members of this group included Captain Koreshige Inuzuka and Captain Norihiro Yasue, who became known as "Jewish experts", the industrialist Yoshisuke Aikawa and a number of officials in the Kwantung Army, known as the "Manchurian Faction". Their decision to attract Jews to Manchukuo came from a belief that the Jewish people were wealthy and had considerable political influence. Jacob Schiff, a Jewish-American banker who, thirty years earlier, offered sizable loans to the Japanese government which helped it win the Russo-Japanese War, was well known. It was assumed that by rescuing European Jews from the Nazis, Japan would gain unwavering and eternal favor from American Jewry. A high-level Japanese government reports on plans for mass emigration to Manchuria in 1936 included references to ethnic conflict between Jews and Arabs as scenarios to avoid.[26] These influential Japanese policy makers and institutions referred to Zionist forms of cooperative agricultural settlement as a model that Japanese should emulate.[citation needed] A colonial enterprise having parallels with Japan's own expansion into Asia. By 1940, Japanese occupied Manchuria was host to 17,000 Jewish refugees, most coming from Eastern Europe. Yasue, Inuzuka and other sympathetic diplomats wished to utilize those Jewish refugees in Manchuria and Shanghai in return for the favorable treatments accorded to them. Japanese official quarters expected American Jewry influence American Far Eastern policy and make it neutral or pro-Japanese and attract badly needed Jewish capital for the industrial development of Manchuria. Post-war, the 1952 recognition of full diplomatic relations with Israel by the Japanese government was a breakthrough amongst Asian nations. Approximately 24,000 Jews escaped the Holocaust either by immigrating through Japan or living under direct Japanese rule by the policies surrounding Japan's pro-Jewish attitude. While this was not the 50,000 expected, and those who arrived did not have the expected wealth to contribute to the Japanese economy, the achievement of the plan is looked back upon favorably. Chiune Sugihara was bestowed the honor of the Righteous Among the Nations by the Israeli government in 1985. In addition, the Mir Yeshiva, one of the largest centers of rabbinical study today, and the only European yeshiva to survive the Holocaust, survived as a result of these events. Inuzuka's help in rescuing Jewish refugees from Nazi Europe was acknowledged by the Union of Orthodox Rabbis of the United States which saved him from being tried as a war criminal. He went on to establish the Japan-Israel Association and was president until his death in 1965. N° de ref. del artículo 72514

Título: The Fugu Plan: The Untold Story of the ...

Founded and operated by trained historians, Ground Zero Books, Ltd., serves the book collector, the scholar, and institutions. We focus on the individual, and pride ourselves on our personal service. Please contact us with your wants, as we have many books not yet listed in our database.