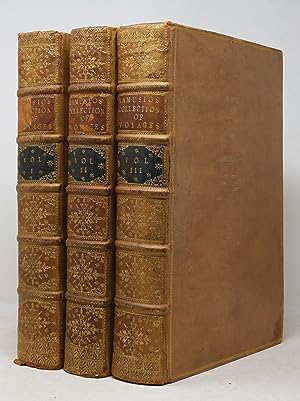 3 volumes, folio (12 1/4 x 8 1/2 inches), ff. [4], 34, 394; 6, 9-18, [10], 256, 90; [6], 36, 430. Woodcut device on each title-page and at the end of each volume, 3 folding engraved maps, 7 folding woodcut maps and plans, woodcut diagrams and illustrations in text (including one full-page map and one full-page plan), woodcut initials. Eighteenth-century calf gilt, spines gilt in compartments (one or two joints starting, covers a bit scuffed). Provenance: 19th-century North Library bookplate of the Earls of Macclesfield on each front paste-down, discreet blind-stamp on each title-page. "PERHAPS THE GREATEST GEOGRAPHER OF HIS DAY" (Kraus). Ramusio's collection of voyages is the first complete account of the important expeditions of the 16th century, including those of Cortez ("Relatione d'Alcune cose della Nuova Spagna, & della gran Cittŕ di Temistitan Messico"), Columbus, Vasco da Gama, Coronado, Cartier, and Cadamosto and contains several accounts not found elsewhere. The first volume relates almost entirely to Africa, the second to Asia and importantly the third to America which includes the earliest obtainable map to accurately depict the Americas "Universale della Parte del Monde Nuovamente Ritrovata," and "La Nuova Francia" the second separate printed map of the Northeast and the first map devoted to New England and New France, both here printed from the second woodblocks after the first were destroyed in a fire at Giunti's printing house in 1557. It includes accounts of Peter Martyr, Oviedo, Cortes, Cabeça de Vaca, Guzman, Ulloa, Coronado, Fray Marcos di Niza, Xerez, Verrazano, and Cartier. Seven large woodcut maps by Giacomo Gastaldi are found in volume three (including the "Universale della Parte del Monde.", a map of Brazil ("La Terra de Hochelaga"), the first plan of Montreal and the earliest printed plan of a settlement in North America , and "La Nouva Francia." From the celebrated library of the Earls of Macclesfield at Shirburn Castle, Oxfordshire, England, accumulated from the early 18th century by generations of the Parker family, and sold (over successive sales) by Sothebys. The first Earl of Macclesfield was Thomas Parker, 1st Baron Parker, made Viscount Parker, of Ewelm in the County of Oxford, and Earl of Macclesfield, in the County Palatine of Chester in 1716. He was Lord Chief Justice of the Queen's Bench from 1710 to 1718 and Lord High Chancellor from 1718 to 1725. This is the only edition in which all three volumes bear the same date. Burden "The Mapping of America" 24 and 25; Kraus "The Writing of American History" page 9; Sabin 67734, 67739, 67742. N° de ref. de la librería 000462

Arader Galleries has specialized in the field of color plate books and early works on paper for over thirty years. The size and quality of our inventory is second to no other dealer. We are committed building the finest art and book collections for our clients. We would be delighted to answer any questions you may have about any of the books listed on ABE or meet you at our Galleries in New York.


We guarantee your satisfaction.