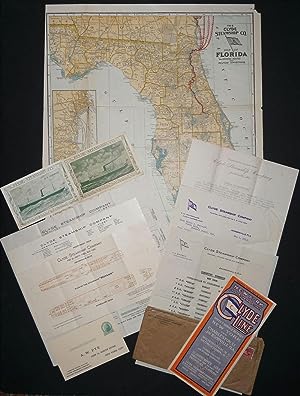 Thirteen printed pieces relating to the Clyde Line of New York, offering luxury steamship travel to Jacksonville Florida, and all points in between. The Line was established in 1844 by Thomas Clyde, connecting Philadelphia with the rest of the East Coast. The headquarters relocated to New York City in 1872; the port of Charleston was included in 1869. Besides connecting the northeast and southeast, the line also served the West Indies, especially the Dominican Republic, after the 1870s. The Clyde line was purchased in 1907 by Charles W. Morse's Consolidated Steamship Lines. It was then taken over in 1911 by the Atlantic, Gulf & West Indies Steamship Lines. The Clyde Line name and flag continued in use until 1932, when Clyde was combined with the Mallory Line to form the Clyde-Mallory Line. Steamboat use in the 19th and early 20th century transformed Jacksonville into an important for the distribution of goods and passengers all along the East Coast. The Archive includes a folding schedule of sailings for April, May and June 1913, opens to 6 panels printed in orange and blue, with large map of the eastern US showing Clyde Line's routes all the way from San Domingo and Havana up to Boston. Two pictorial postcards with 2 ships of the line (printed in green with decorative borders), the SS Mohawk (postally used; mailed from Charleston to NY) and SS Comanche (not postally used). With a pre addressed postage paid postcard to A. W. Pye, Pier 36, North River, New York City, for passengers to list the names and addresses of friends who are "going south during the Winter". A roneographed typed 'Notice to Passengers' on Clyde Steamship Passenger Department letterhead announcing the passenger classes that certain of the steamships will carry and the associated costs, signed F. M. Ironmonger, Fla. Pass. Agt. A roneographed typed 'Corrected Schedule' on Clyde Steamship letterhead, dated May 1916 for Jacksonville to Charleston and New York, signed H. G. Wenzel, Florida Passenger Agent. A roneographed typed reservation for the Steamer Lenape Room 49, addressed to passenger Miss Edith S. Hubbard of Federal Point Fla., dated May 6, 1913, and signed F. M. Ironmonger, Fla. Pass. Agent; with Clyde Steamship envelope addressed to Miss Hubbard and stamped & canceled May 1913. Four separate printed steamship plans: 2 for the Mohawk, Apache, and Arapahoe showing 2 decks (11 x 6 1/2"), and 2 larger steamship plans, the first for the Mohawk, the second for the Lenape, showing 3 decks (12 1/2 x 10 1/2"). The last item in the archive is a large unfolded pamphlet that displays a "Map of Florida Showing Routes & Railroad Connections", with insets of the East Coast and the ships' routes, along with the western Panhandle of Florida. The map produced by Hammond (copyrighted 1903) and overstamped with the title. N° de ref. de la librería 22768

We have been booksellers for 41 years, members of the ABAA, ILAB & many prominent trade organizations. You may order from us with the security that an established & reputable bookseller offers you, who abides by the code of ethics established by ILAB. We offer old, rare & out of print books, maps, prints, ephemera & photographs on many subjects. Some of our specialties include the Hudson River Valley, the Antarctic & Arctic, Australia & the South Pacific. We do however handle and value items in every field.


Prices in US $. Postage/packing extra & all items are offered subject to prior sale.


Orders usually ship the same day. Shipping costs are based on books weighing 2.2 LB, or 1 KG. If your book order is heavy or oversized, we may contact you to let you know extra shipping is required.