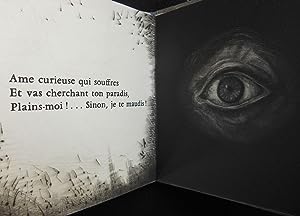 Descripción: Verdigris, [Octon, France], 2007. Accordion. Condición: Fine. Rothchild, Judith Ilustrador. Limited Edition. Number 2 of 33 copies, forty-eightmo size, [9] pp., signed by printer Mark Lintott and Judith Rothchild, text in French. This poem by Charles Baudelaire (1821-1867) was intended as an epigraph for the second edition of "Le Fleurs du mal" [The Flowers of Evil], first published in 1857 and a major work of both the symbolism and modernist movements. Upon its publication, Baudelaire was prosecuted by the Second Regime in France and fined 300 francs, and six poems were suppressed for their erotic content (the ban on these poems was not lifted in France until nearly one hundred years later, in 1949) (n. b., info from Wikipedia). "Epigraphe" was never used in the second edition, but was inserted into the third edition of "Le Fleurs du mal", and the poem is printed here as an accordion book inside a case. This edition is heightened by rich prints by Judith Rothchild (b. 1950), with heavy drypoint marks surrounding the text of the poem and mezzotints at the beginning and end of the accordion. The darkly haloed eyes on either end of the poem evoke the challenge presented by Baudelaire: "Ton oeil sait plonger dans les gouffres. . .[Your eye knows how to dive into the chasms. . .]". ___DESCRIPTION: Accordion book in a case with quarter grey cloth with marbled paper covered boards, title in black on the front board, grey paper spine lable with black lettering, green paste-down endpapers, accordion with green paper front board with title in black, attached to the back board of the case by the last page, title page with black-and-white mezzotint of a closed eye by Judith Rothchild, black-and-white prints by Rothchild throughout; Vendome Romain type, Hahnemuhle paper, forty-eightmo size (3.75" by 3.5"), 9 unnumbered pages, one of 33 copies, this number 2, signed by Mark Lintott and Judith Rothchild on the colophon. Please note that the text is in French. In a slipcase covered in grey paper with a dark blue abstract pattern. ___CONDITION: A fine copy; the covers clean, the corners straight and unrubbed, the binding tight with solid hinges, the interior clean and bright, and free of prior owner markings; clean, crisp, as new. The slipcase is fine also, strong and sturdy, clean, without wear. ___POSTAGE: International customers, please note that additional postage may apply as the standard does not always cover costs; please contact us for details. ___Swan's Fine Books is pleased to be a member of the ABAA, ILAB, and IOBA and we stand behind every book we sell. Please contact us with any questions you may have, we are here to help. Nş de ref. del artículo: CNJL474 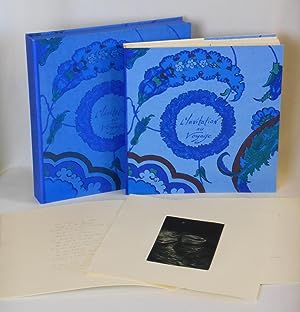 Descripción: Verdigris, Octon, France, 2000. Folio in a case. Condición: Fine. Rothchild, Judith Ilustrador. Limited Edition. Number 4 of 10 de luxe copies (total edition 50), quarto size, [16] pp., signed by Judith Rothchild with an additional print also signed, in French. A single poem, "L'Invitation au Voyage" is from the collection Les Fleurs du mal, first published in 1857, penned by Charles Pierre Baudelaire (1821-1867), the French poet credited with influencing a whole generation of symbolist and modernist poets. "Les Fleurs du mal" deals with the changing landscape of Paris during the industrial revolution; his longing for the Paris of yore frames a retreat into an exotic fantasy world with his desire to make beauty from darkness. In the poem he invites his mistress to dream with him of a more sublime and tranquil, natural world where they can live together. This piece lacks the exotic and often grotesque imagery so often associated with Les Fleurs du mal; instead, Judith Rothchild's mezzotints illustrate the idyllic landscape dream world of the poem, darkly obscuring it into small windows, as if snipped from the imagination of the poet's mistress, who struggles to dream of the prescribed world as so loftily presented by the enigmatic Baudelaire. ___DESCRIPTION: Loose concertina housed in stiff wrapper sirigraphed in shades of blue designed to resemble Moorish tile with title lettered in black to a dark-blue backstrip, rough-cut edges, title page with a single, small, circular mezzotint, text in French, eight additional mezzotints throughout the poem; Hahnemuhle paper, quarto size (10.5" by 10.25"), unpaginated with [16] pp., limited edition, this number 4 of 10 de luxe copies, from a total edition of 50, signed by Judith Rothchild. With one additional mezzotint numbered and signed by the artist in pencil, with a poem by Baudelaire hand-written by Rothchild in French on the leaf surrounding the mezzotint, encased in its own paper sleeve. Both are housed in a matching blue fall-down-back case. ___CONDITION: Fine; crisp, clean, as new and free of prior owner markings; in a like case. The mezzotints are lush and deep, and must be experienced in person to gain a full appreciation. ___POSTAGE: International customers, please note that additional postage may apply as the standard does not always cover costs; please inquire for details. ___Swan's Fine Books is pleased to be a member of the ABAA, ILAB and IOBA and we stand behind every book we sell. Please contact us with any questions you may have, we are here to help. Nş de ref. del artículo: CNJL1258